35 Funny Names Kids Give Everyday Things, According To Their Parents 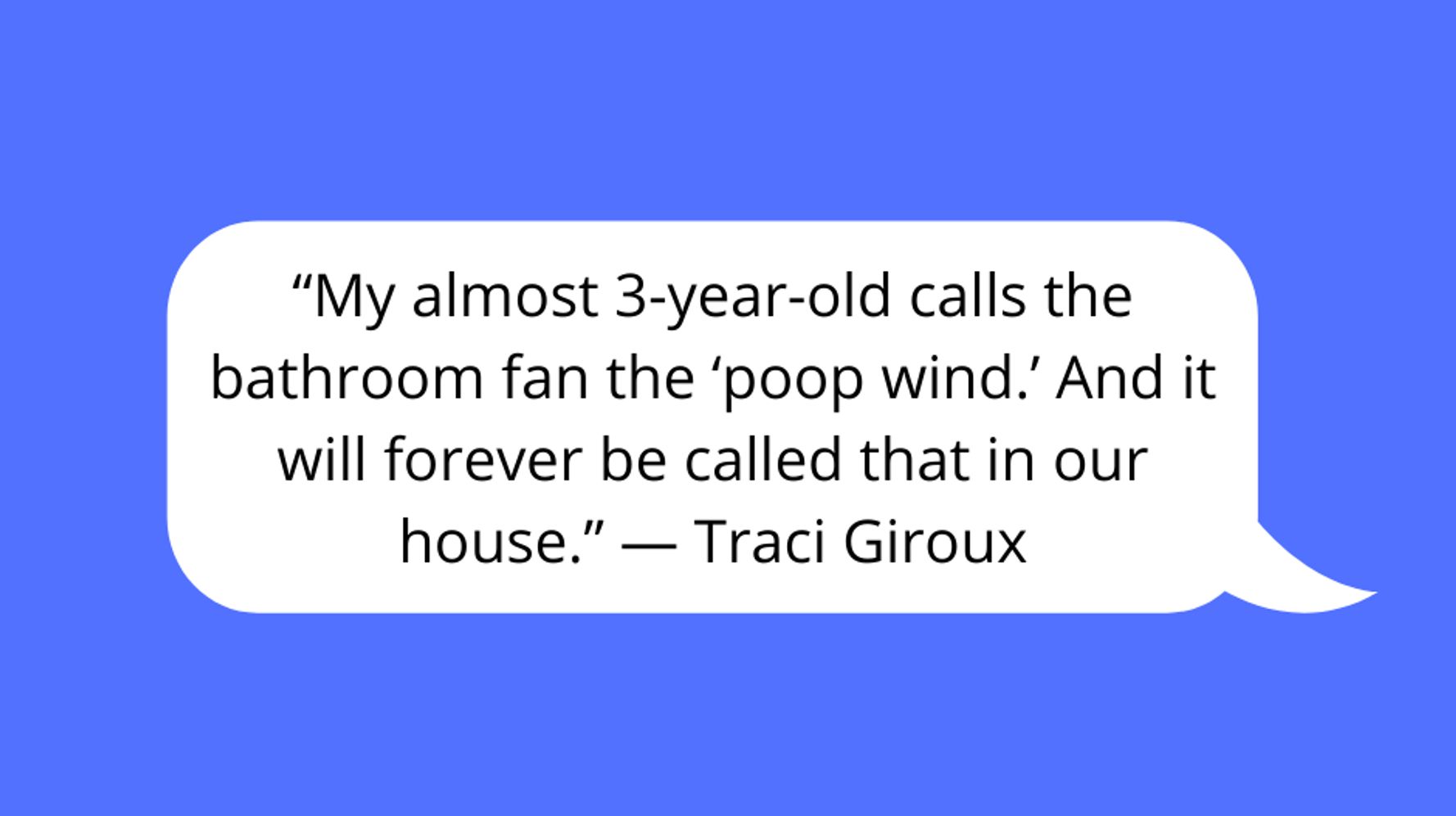 “JGI/Jamie Grill via Getty ImagesKids are still learning the English language, so they’re bound to make a few errors.Anyone who’s been around children knows they offer a number of creative takes on the English language. From malapropisms to too-real descriptors, some of their turns of phrase are funnier and arguably superior to the correct terms. We asked members of the HuffPost Parents Facebook community to share the funny names their kids have for various things, and received an overwhelming number of responses. Read on for a hilarious sample. 1. “My daughter called pistachios ‘Grinch Nuts.’” ― Lyra Maghirang 2. “My 13-year-old thought it was ‘nuke warm,’ not lukewarm.” ― Callie Van Leuven3. “My daughter calls Wendy’s ‘the lady restaurant.’” ― Amanda Liz Draper-Livengood4. “My daughter called a head of lettuce a ‘salad ball,’ and that’s forever what we call it.” ― Darcie Johnson Bane 5. “My daughter used to call a plain hamburger ‘airplane hamburger.’ It took me a while to figure it out since she had never been on a plane.” ― Margie Harper 6. “My son used to say he could hear my heart ‘beep.’” ― Beci Figini Renot7. “When my son was younger, we didn’t buy soda (Coke, Pepsi), so when we went to restaurants he would ask for ‘black juice.’” ― Melony Murphy8. “Pants = ‘leg prisons’ to our oldest.” ― Christine M. Sullivan 9. “My almost 3-year-old calls the bathroom fan the ‘poop wind.’ And it will forever be called that in our house.” ― Traci Giroux 10. “My 3-year-old son calls mustard ‘hot dog syrup.’” ― Kasi Marshall 11. “My now 10-year-old used to say ‘hella-cockatiel’ for helicopter.” ― Jennifer Straube 12. “My son calls the ottoman an ‘abdomen.’ It’s really funny when he goes to other people’s homes and says, ‘Can I put my feet on your abdomen?’” ― Amanda Rodriguez 13. “A boy I babysat called lasagna ‘spaghetti cake.’” ― Allison Kennedy14. “Our oldest called knives ‘cut its’ because we would say ‘Do you want me to cut it?’ So he would say fork, spoon, cut it.” ― Jen Trotter Milke15. “My son used to call instructions ‘destructions’ ― which could be explained by my terrible DIY skills!” ― Jamie Smith 16. “My son used to say ‘moldy bar’ for granola bar.” ― Maya Broadfoot17. “Both of my girls referred to their backpacks as ‘pack packs.’” ― Cindy CJ Avis Farrow18. “My kids called napkins ‘good manners’…. Lol.” ― Gina de los Santos19. “My son called all UPS trucks the ‘bubble wrap truck.’” ― Christina McLaughlin20. “My daughter calls hard taco shells ‘crunchy buns,’ and I don’t think we will ever call them something else.” ― Angie Salo 21. “When my now 9-year-old son was little, he always called bras ‘boobie pants.’ Walking through the underwear section of shops with him was always a fun experience with him yelling it at the top of his voice, as it made him laugh.” ― Emma Williams22. “My daughter calls polka-dots ‘cocoa-dots’ and fire hydrants ‘hydro firemen’s.’ And instead of whistling to call the dog, she says ‘feet feet.’” ― Mindy Guthrie23. “My daughter called Kit Kat candy ‘Kitty Kats’ and Frosted Flakes cereal ‘Frosted Snowflakes.’” ― Gena Bennett Catino 24. “We passed by a Planet Fitness a while back, and my son in the backseat says, ‘Oh look, Mommy, a thumb store!’ (The logo has a thumbs-up.)” ― Lura Kahle Bain 25. “My 4-year-old daughter calls a dinosaur a ‘dinosnore,’ and I hope she never says it right.” ― Malaika Prinsloo 26. “My son wanted ‘ice cream cheese’ on his bagel instead of cream cheese.” ― Julie Stockert Duffield27. “My daughter told me that women carry babies in their ‘universe.’” ― Lindsay Curtin28. “My son often confuses adults who aren’t around him a whole heckuva lot with requests for ‘fresh pies.’ He wants french fries!” ― Sara G. Nolte29. “My oldest use to call cupcakes ‘butt cakes’ when he was 2, no idea where he got it from. He yelled it all around the grocery store, too.” ― Kassandra Anne Vance 30. “Lightsabers = ‘site labors.’” ― Linda Marshall31. “When my oldest son was about 5, he tried to tell me what TV program his babysitter had been watching, and he kept saying ‘The Young and the Rest-of-Them’ instead of ‘The Young and the Restless.’” ― Trish Waddell Blevins-Taylor 32. “My daughter used to call all computers and TV remotes ‘beep-boops.’ To this day, we still call the Roku remote the beep-boop.” ― Sue Meredith 33. “Restaurants are called ‘food houses’ and McDonald’s is called ‘Old McDonald’s.’” ― Erica Geizer Worley34. “‘Leg Knuckles.’ My daughter didn’t know the word for knees yet, so she described them — quite accurately, in my opinion.” ― Rheanna Chou35. “My son called Salisbury steak ‘salad-berry steak.’” ― Erika WilsonResponses have been lightly edited.