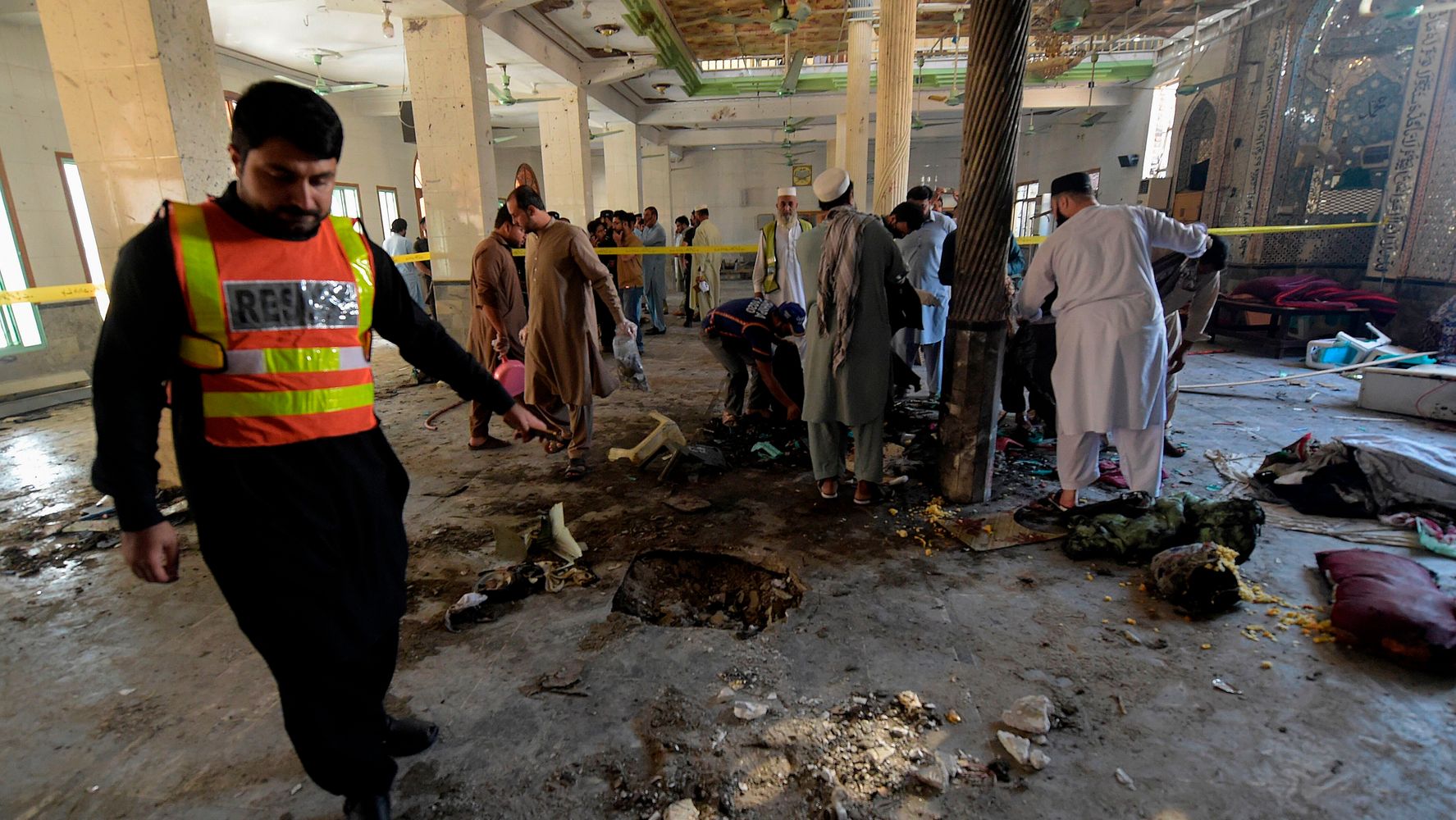 “ABDUL MAJEED via Getty Images Rescue workers collect remains at the site of a blast in a religious school in Peshawar on Tuesday. PESHAWAR, Pakistan (AP) — A powerful bomb blast ripped through an Islamic seminary on the outskirts of the northwest Pakistani city of Peshawar on Tuesday morning, killing at least seven students and wounding 112 기타, police and a hospital spokesman said. The bombing happened as a prominent religious scholar during a special class was delivering a lecture about the teachings of Islam at the main hall of the Jamia Zubairia madrassa, said police officer Waqar Azim. He said initial investigations suggest the bomb went off minutes after someone left a bag at the madrassa. TV footage showed the damaged main hall of the seminary, where the bombing took place. The hall was littered with broken glass and its carpet was stained with blood. Police said at least 5 kilograms (11 pounds) of explosives was used in the attack. Several of the wounded students were in critical condition, and hospital authorities feared the death toll could climb further. Authorities said some seminary teachers and employees were also wounded in the bombing. Initially, police said the bombing killed and wounded children but later they said almost all of the students were in their mid-20s. Shortly after the attack, residents rushed to the seminary to check up on their sons or relatives who were studying there. Many relatives were gathering at the city’s main Lady Reading Hospital, where the dead and wounded students were brought by police in ambulances and other vehicles. Some Afghan students studying at the seminary were also among the wounded persons, officials said. Pakistani Prime Minister Imran Khan condemned the bombing and asked authorities to ensure the provision of the best possible medical aid to the victims. From his hospital bed, a wounded student, Mohammad Saqib, 24, said religious scholar Rahimullah Haqqani was explaining verses from the Quran when suddenly they heard a deafening sound and then cries and saw blood-stained students crying for help. “Someone helped me and put me in an ambulance and I was brought to hospital,"라고 말했다. Saqib had bandages on both arms but he was listed in stable condition. Another witness, Saeed Ullah, 24, said up to 500 students were present at the seminary’s main hall at the time of the explosion. He said teachers were also among those who were wounded in the bombing. A video filmed by a student at the scene showed the Islamic scholar Haqqani delivering a lecture when the bomb exploded. It was unclear whether the teacher was among the wounded. Mohammad Asim, a spokesman at the Lady Reading Hospital, said seven students died and they received 70 wounded persons, mostly seminary students. A separate hospital was treating 42 기타. The attack comes days after Pakistani intelligence alerted that militants could target public places and important buildings, including seminaries and mosques across Pakistan, including Peshawar. No one immediately claimed responsibility for the attack in Peshawar which is the provincial capital of Pakistan’s Khyber Pakhtunkhwa province bordering Afghanistan. The province has been the scene of such militant attacks in recent years, but sectarian violence has also killed or wounded people at mosques or seminaries across Pakistan. The latest attack comes two days after a bombing in the southwestern city of Quetta killed three people. The Pakistani Taliban have been targeting public places, schools, mosques and the military across the country since 2001, when this Islamic nation joined the U.S.-led war on terror following the Sept. 11 attacks in the United States. Since then, the insurgents have declared war on the government of Pakistan and have carried out numerous attacks, including a brutal assault on an army-run school in the city of Peshawar in 2014 that killed 140 children and several teachers.