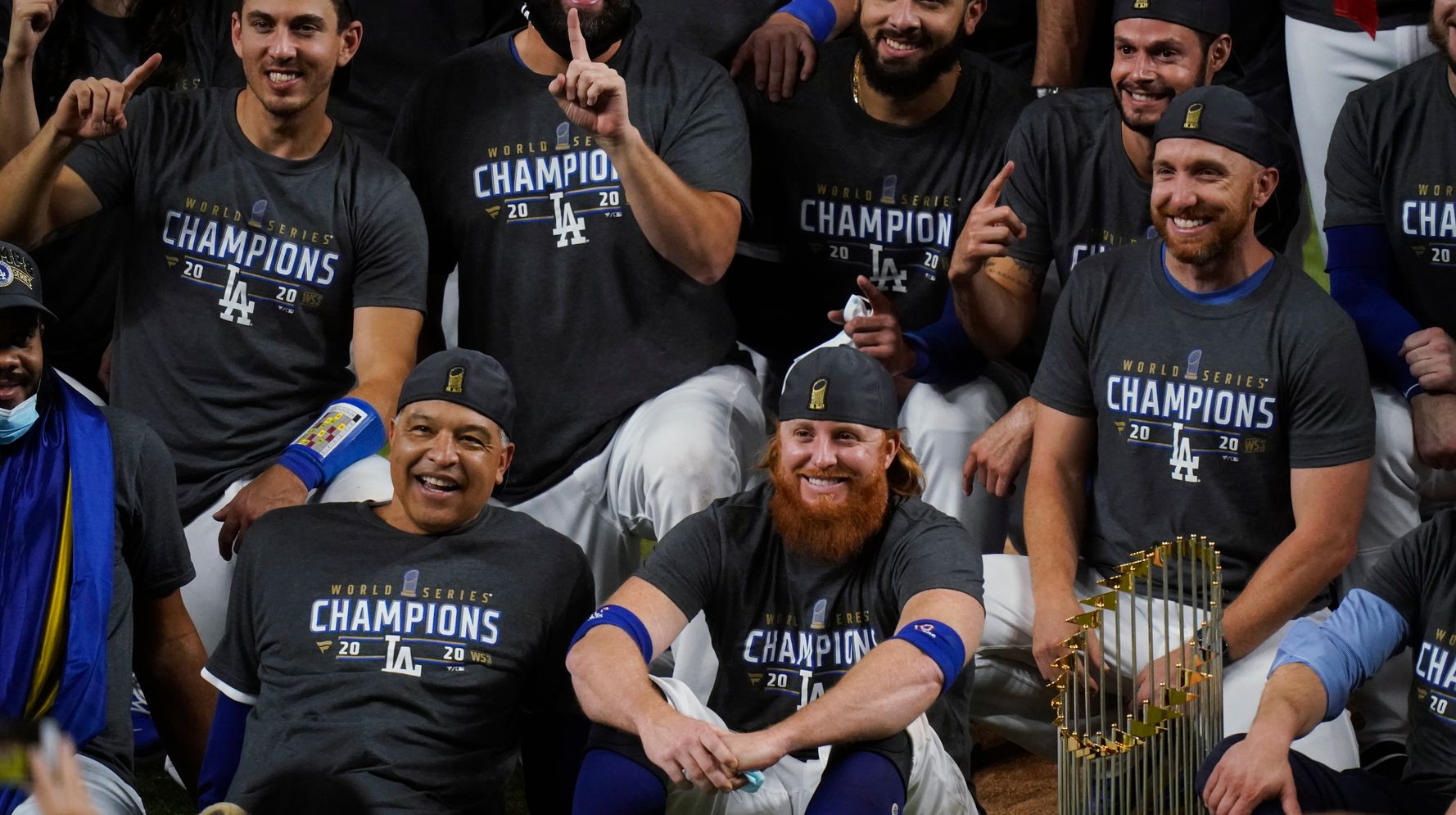 “Justin Turner was pulled from the Los Angeles Dodgers lineup during the eighth inning of their World Series-clinching Game 6 win over the Tampa Bay Rays on Tuesday after testing positive for the coronavirus. But despite Turner’s diagnosis, the Dodgers’ third baseman returned to the field at Globe Life Field in Arlington, Texas, following the victory to celebrate with teammates. Turner was filmed removing his mask: Justin Turner returns to the field for the team picture. pic.twitter.com/NmXBbU7Mo7— FOX Sports: MLB (@MLBONFOX) October 28, 2020 He posed for a photo with teammates, without his mask: ASSOCIATED PRESS Turner hugged teammates: ASSOCIATED PRESS Ronald Martinez via Getty Images And embraced his wife, Kourtney Pogue: Ronald Martinez via Getty Images Dodgers’ right fielder Mookie Betts defended Turner’s return to the field. “He’s part of the team,” Betts said, per ESPN. “Forget all that, he’s part of the team. We’re not excluding him from anything.” Critics on Twitter, however, questioned why Turner was allowed back to celebrate and how he’d contracted the virus, given the bubbles that Major League Baseball teams were placed into in the postseason. Justin Turner was pulled from the game for testing positive for COVID-19. Now’s he’s sitting maskless taking photos on the field??? pic.twitter.com/uGkdBKOG3K— Michael Schwab (@michaelschwab13) October 28, 2020 Yo this Justin Turner thing is crazy!! He tested positive twice, including yesterday, insisted being on the field, going against medical advice….kissing his wife, there’s a photo of him maskless next to Dave Roberts….This should be a huge scandal.— Mack Kary (@karymack) October 28, 2020 Justin Turner just had his mask off next to a maskless Dave Roberts. WHAT. ARE. WE. DOING? #WorldSeries— Timothy Bella (@TimBella) October 28, 2020 Uh, so are they just going to breeze over the fact that Justin Turner got pulled from the World Series in the middle of a game with a positive coronavirus test and a huge, mostly maskless celebration ensued?— Mitchell Byars (@mitchellbyars) October 28, 2020 1) This is the first positive coronavirus test for MLB player in months & it came during last game of season2) How did Justin Turner contract coronavirus in the bubble?3) Why are test results being received during games & not before? He could’ve exposed others while playing https://t.co/9cmY8wPkH1— Aaron Rupar (@atrupar) October 28, 2020 How is it that Justin Turner of the @Dodgers tested positive for COVID and is then on the field after the game with no mask celebrating with maskless fans on the field? This country is so messed up.— Blank Slate (@blankslate2017) October 28, 2020 Turner has not responded to the criticism of his maskless return. Following his removal from the game, however, he did thank fans for reaching out: Thanks to everyone reaching out! I feel great, no symptoms at all. Just experienced every emotion you can possibly imagine. Can’t believe I couldn’t be out there to celebrate with my guys! So proud of this team & unbelievably happy for the City of LA#WorldSeriesChamps— Justin Turner (@redturn2) October 28, 2020