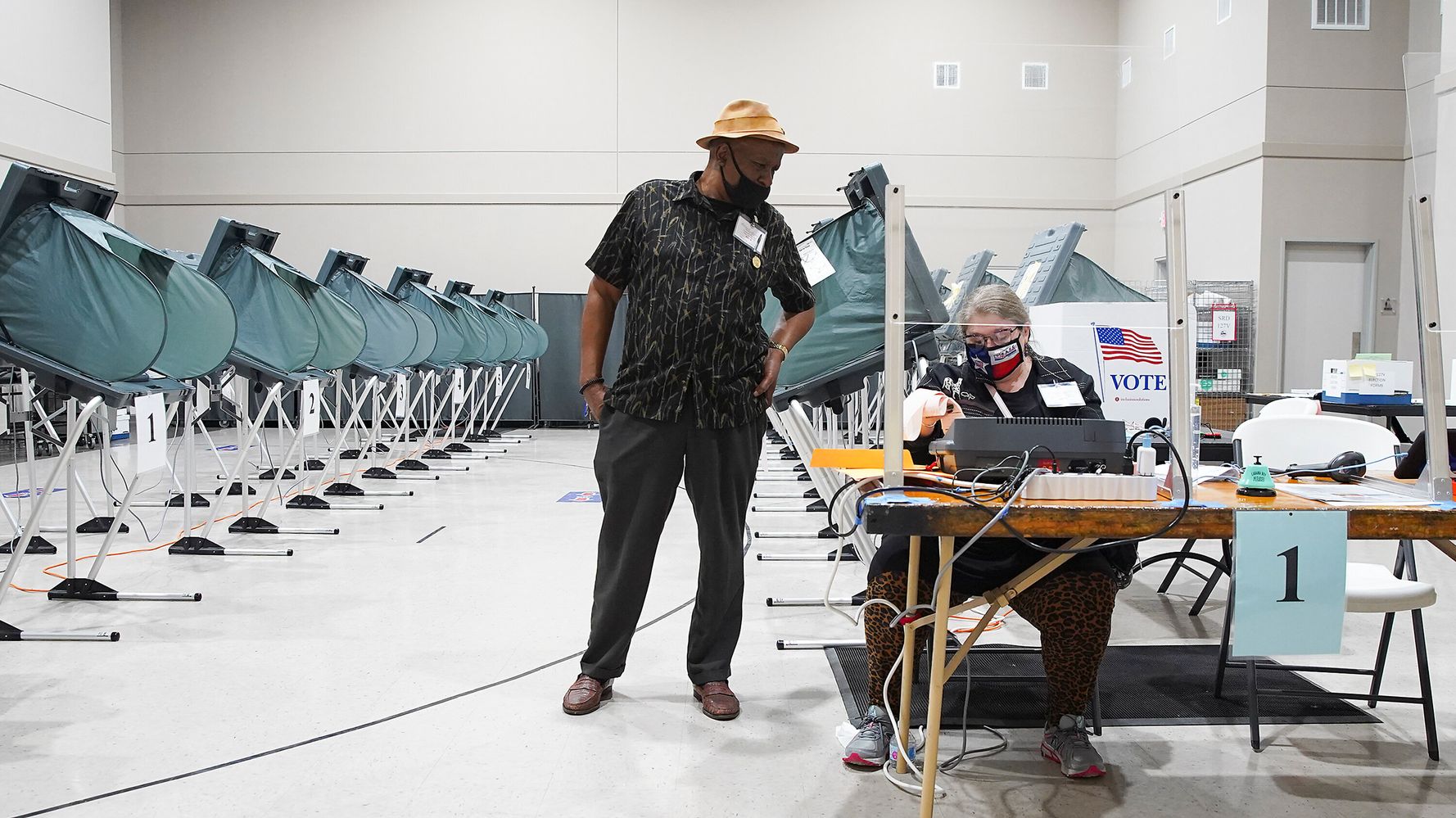 “IOWA CITY, Iowa (AP) — A surge in coronavirus cases across the country, including in key presidential battleground states, is creating mounting health and logistical concerns for voters, poll workers and political parties ahead of Election Day. In Iowa, where both presidential campaigns are competing feverishly, county officials said they were preparing for scores of confirmed or potentially infected people to vote curbside. It’s an option typically used by disabled people that must be available outside every polling place. Linn County Supervisor Stacey Walker, in Cedar Rapids, encouraged people to cast their ballot but said they should take safety precautions at polling places to protect themselves and their neighbors. “We can’t afford to have Election Day serve as a superspreading event across the state and country,” he said. At a news conference this past week, Iowa Secretary of State Paul Pate said his office had distributed 145,000 gloves, 200,000 masks and 11,000 social-distancing markers for use by voters and poll workers. In Wisconsin, Gov. Tony Evers sought to assure voters in the critical swing state that going to the polls would not be risky, even as officials announced more than 5,000 new confirmed coronavirus cases on Friday. “For those who are voting in person now, I believe it’s safe,” Evers said, adding that polling places have adequate supplies to protect voters. ASSOCIATED PRESS Chris Helps, of Earlham, Iowa, gets his hands sanitized by polling place volunteer Frank Hayer, right, during early voting, Tuesday, Oct. 20, 2020, in Adel, Iowa. (AP Photo/Charlie Neibergall) Across the country, Republicans worked to downplay any concerns that health risks will keep some of their voters home, after Democrats heavily promoted mail-in and early in-person balloting to their voters. Republicans are counting on a huge Election Day turnout among their supporters to offset the big leads in early voting among Democrats in states that are pivotal to the presidential race. “If you were worried about voting at the polls on Election Day, you’ve probably already voted,” said John March, a spokesman for the Republican Party of Virginia. Like many other states, Iowa this week reported its highest number of average daily new cases and hospitalizations to date. In Cedar Rapids, public health officials called a news conference Friday to express alarm at the spike in cases in Linn County, including a single-day high reported Thursday of more than 200. They urged residents to avoid gatherings while advising those who visit polling places to wear masks, stay 6 feet apart and wash their hands afterward. Linn County Auditor Joel Miller said a woman who acknowledged she was positive for coronavirus voted curbside Thursday at a mall where early voting is taking place, the first known infected voter in the county. Poll workers gave her a face shield and gloves and isolated everything she touched, he said. Several other voters who were awaiting test results or wanted to avoid the line for health reasons also used it, and county auditors were preparing for a major increase in the rarely-used option Tuesday. Under curbside voting, residents call a phone number for assistance from their vehicle and a bipartisan poll worker team is sent to help them cast ballots. Miller, 65, said he is concerned about contracting the virus after spending hours this week assisting voters and will get tested again Sunday. He said he was worried about the virus spreading at polling places Tuesday, noting that voters cannot be required to wear masks. “Heck yes I’m concerned. I’m going to have 500 people working on Tuesday. I don’t want it on my conscience that somebody caught COVID at a polling place and got sick,” he said. “It could happen. It could happen to me.” ASSOCIATED PRESS A senior citizen, left, is escorted to the head of the line, Sunday, Nov. 1, 2020, on the last day of early voting at P.S. 175 in the Harlem neighborhood of New York. (AP Photo/Kathy Willens) County auditors have small full-time staffs and rely on experienced polling place workers to run smooth elections. They say they are worried that any of those workers who test positive before Tuesday will be replaced with less experienced people, which could lead to long lines. In Davenport, Iowa, Scott County Auditor Roxanna Moritz asked her employees several days ago to self-quarantine to avoid the possibility of catching the virus before Tuesday. Moritz said she has received several calls this week from people who have tested positive or are hospitalized with coronavirus seeking advice on how to vote. One woman was crying over the situation. Her staff is working with hospitals to deliver ballots to patients and is promoting curbside voting for those infected at early voting locations and on Election Day. She said curbside voting is labor intensive and risky. “Some of my poll workers are a little bit concerned because they are older individuals,” she said. “Still, I would rather do curbside than have them (voters) go to the polls.” Moritz said she has been relieved by the high number of early voters in her county, which will ease the burden on Election Day. Still, she said she worries that crowded polling places could become a source of spread for the coronavirus. At a public library in Davenport on Friday, poll workers were sanitizing voting stations and pens between users. People waiting in line outside the library were wearing masks and staying 6 feet apart. Lenore Benton-Bey, a Davenport retiree, said the socially distanced crowd didn’t bother her: “I’ve got a whole bottle of hand sanitizer in the car,” she said. Associated Press writers Gretchen Ehlke in Milwaukee; Denise Lavoie in Richmond, Virginia; and Geoff Mulvihill in Davenport, Iowa, contributed to this report.