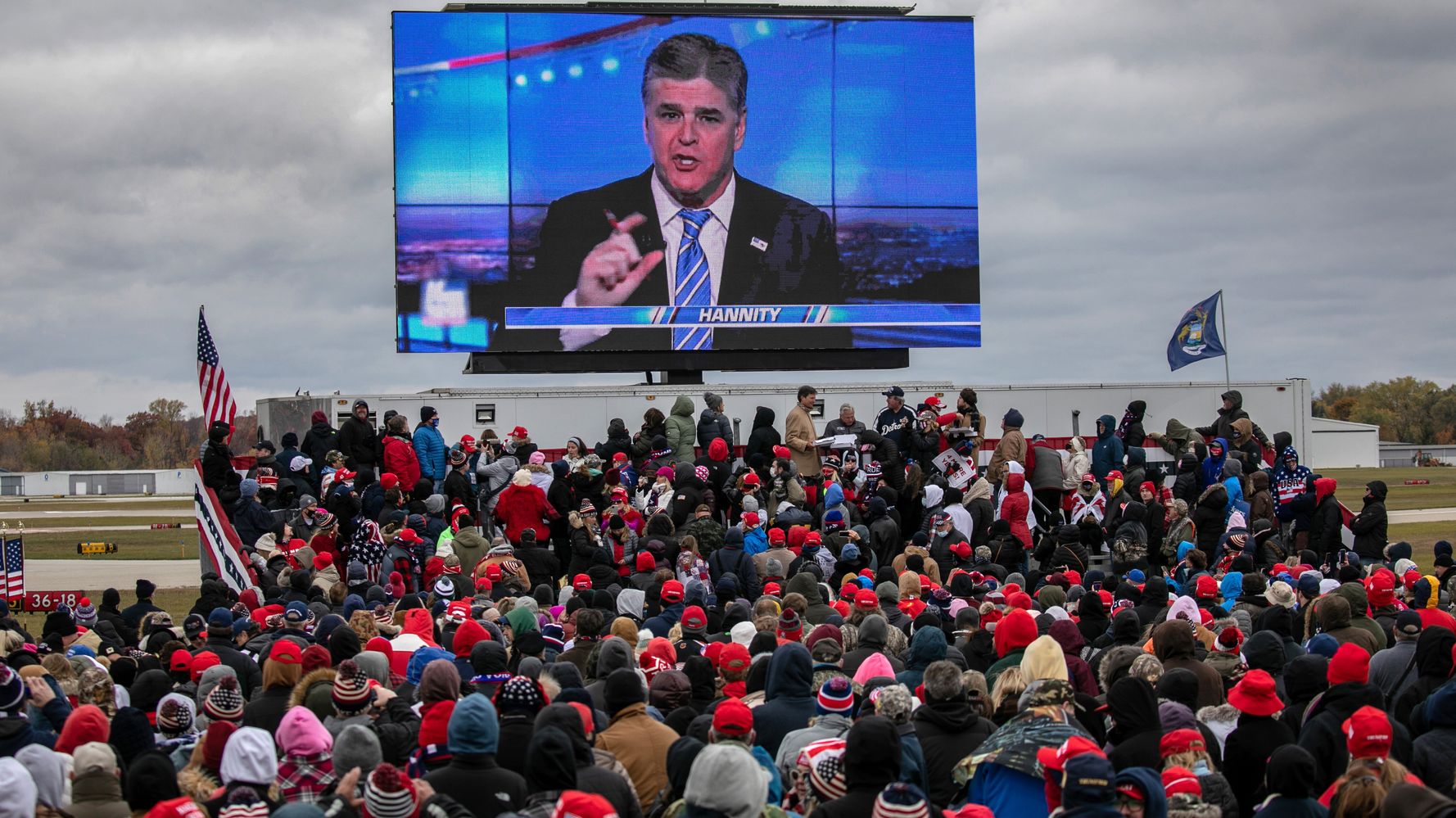 “John Moore via Getty Images Supporters of President Donald Trump watched a video featuring one of his most vocal backers, Fox News host Sean Hannity, ahead of Trump’s arrival to a campaign rally on Oct. 30 in Waterford, Michigan. It is a strange time at Fox News. Caught between the reality that Democratic nominee Joe Biden is on pace to win the White House and an unwavering fealty to President Donald Trump, the network is divided between its decision desk reporting of the results and its marquee opinion hosts bent on discrediting those calls and creating doubts about the election’s legitimacy. The network’s decision desk called Arizona for Biden on election night (with only The Associated Press joining it in doing so), and that provoked the severe ire of the Trump campaign. As the vote count has continued in closely contested states, Fox News’ daytime news anchors have noted Trump has no evidence for his claims of mass ballot fraud. But during morning shows and in primetime, Fox News is airing a different story. Hosts Tucker Carlson, Sean Hannity and Laura Ingraham ― all of whom serve as informal advisors to Trump ― are using their platform to undermine the vote and sow distrust in the outcome.  On Thursday evening, the network’s evening coverage was marked by the hosts and various Republican officials and hosts spreading falsehoods that had initially only circulated among far-right conspiracy outlets, diehard Trump supporters and the social media accounts of the president’s adult sons.  Ingraham aired a segment featuring the widely debunked falsehood that Sharpie pens were given to voters in the swing state of Arizona in an attempt to invalidate GOP votes, a conspiracy that had gained enormous traction on social media. The segment featured a pro-Trump Arizona voter who claimed without evidence that her ballot was affected while Ingraham made false claims suggesting Democrats were possibly committing election fraud.  In reality, by the time the segment on Ingraham’s show aired, the Sharpie conspiracy has been widely discredited ― including by Arizona’s Republican attorney general who issued a statement saying “we are now confident that the use of Sharpie markers did not result in disenfranchisement for Arizona voters.” Ingraham didn’t acknowledge that development.  Another Ingraham guest, House Minority Leader Kevin McCarthy (R-Calif.), made absurd victory claims and suggested without evidence that some kind of plot to steal the election was underway. “President Trump won this election, so everyone who is listening: Do not be quiet, do not be silent about this. We cannot allow this to happen before our very eyes,” McCarthy said. Ingraham didn’t correct him, either.  Fox News has had a codependent relationship with Trump from well before he became president. It’s his favorite network ― he calls in just to chat and often tweets about the same subjects its hosts are discussing on TV. And the network promotes him and his messaging. That could change; Fox News could, sensing a loss for the president, break with him and air more critical content, as conservative news outlets such as The New York Post have. But whether it’s because the opinion hosts are true believers or because they know many of their own viewers side with the president, Fox News’s opinion personalities are for now remaining loyal.  That means some tension with the decision desk, particularly after its Arizona call. The move enraged the Trump campaign, prompting panic among aides and a desperate call from the president’s senior adviser and son-in-law, Jared Kushner, to Fox News owner Rupert Murdoch to plead for a retraction. Murdoch refused to intervene, resulting in a visible rift between the openly Trump-loyalist hosts and decision desk head Arnon Mishkin. Trump supporters have also expressed anger at the network’s call, and Republican protesters swarming vote-counting centers to rally around the president have chanted “Fox News sucks” as part of their efforts to intimidate election officials. Carlson, Fox News’ top-rated host, has repeatedly questioned the decision desk’s projection of an Arizona win, and condemned news organizations in general for making “hasty calls” about the election. “People are very concerned” about the decision desk call, Carlson said on Wednesday.  Hannity ― who appeared in a Trump campaign ad endorsing him ―  has repeated the president’s groundless accusations of voter fraud and, on his Thursday night broadcast, brought up the idea that Pennsylvania could have a “do-over” election. Sen. Lindsey Graham (R-S.C.), one of his guests, called the vote count in Pennsylvania’s largest city, Philadelphia, “crooked” and suggested the state legislature should consider invalidating the vote. Another guest, Sen. Ted Cruz (R-Tex.), echoed Graham, saying that Democrats were trying to “potentially steal an election.” And on the same show, former House Speaker Newt Gingrich (R-Ga.) went on a long rant, calling the election a “crisis of survival” for America. On the pro-Trump show Fox & Friends, Rep. Michelle Fischbach (R-Minn.) proclaimed that Trump had won and that Democrats were “just finding votes at this point.”  As the Fox & Friends hosts condemned the media and suggested election fraud, Trump’s lead in Pennsylvania continued to slip away before Biden eventually pushed ahead.