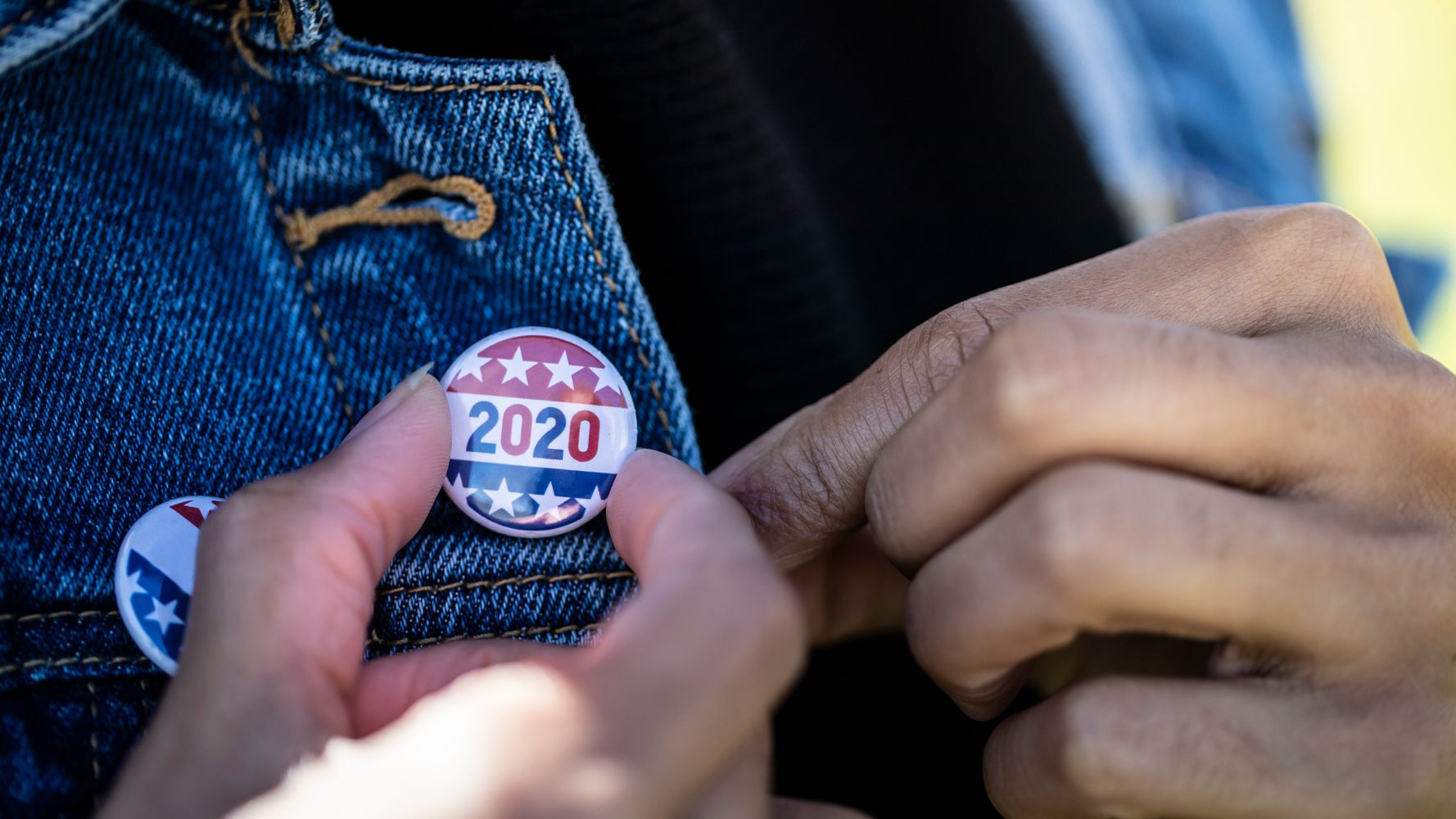 “LPETTET via Getty Images A young African American woman holding a voting badge. Voters’ top issues in this election include the economy, health care and the pandemic, a new HuffPost/YouGov poll finds. President Donald Trump’s campaign, voters say, has focused largely on the economy, while Joe Biden’s campaign has spent more time addressing the latter two issues. No matter how atypical this year has turned out to be, voters’ top issues cover familiar ground. Asked to select three top campaign issues from a list of 15 topics, 47% of voters picked the economy and 46% chose health care, with 31% naming the coronavirus outbreak. That trio was trailed by immigration (22%), the Supreme Court (19%), the environment and gun policies (each at 17%), social issues (11%), and abortion policy (10%). None of the remaining topics, including foreign policy and the candidates’ personal qualities, reached double digits. Concerns are starkly polarized. Democratic and Democratic-leaning voters say they’re most concerned about health care (59%), the coronavirus (44%), the economy (33%) and the environment (31%). Republican and Republican-leaning voters describe themselves as overwhelmingly focused on the economy (61%), followed by health care (34%), immigration (31%) and the Supreme Court (27%). Ariel Edwards-Levy/HuffPost Results of a new HuffPost/YouGov poll on top campaign issues. Those divides largely echo voters’ perceptions about where each of the candidates has focused their attention. The two issues voters are most likely to say they’ve heard about from Biden are the coronavirus outbreak (44%) and health care (43%), followed by criticism of Trump (31%). About 1-in-5 voters said Biden had focused on the economy, the environment and social issues, respectively, with no other issues breaking into the double digits. The two issues voters are most likely to say they’ve heard about from Trump are the economy (46%) and criticism of Biden (41%), followed by the Supreme Court (28%). Just 18% say the coronavirus outbreak has ranked among Trump’s top campaign issues, with the same percentage citing immigration. And further down the list, just 11% mention crime. Ariel Edwards-Levy/HuffPost Results of a new HuffPost/YouGov poll on top campaign issues. As we’ve written previously, any poll aiming to measure voters’ top concerns deserves to come with a few caveats. For one, the results of any poll on top issues will depend, to a significant degree, on the topics listed. Also, what people define as an issue and what they mean when they talk about it is complicated. That may be especially true this year, when the pandemic itself is inextricably tied to economic and health care issues. Additionally, people can’t often pinpoint a specific set of issues that influence their ultimate decision to pick one candidate over another. For many, their decision-making process simply doesn’t work that way. Those voters attached to one or the other parties will overwhelmingly vote along party lines; the small, crucial pool of persuadable voters are often more idiosyncratic than ideological. Finally, which issues voters see as important often reflects what stories they’re seeing in the media and what messaging they’re hearing from campaigns. Precisely because of that, however, a disconnect between what voters indicate as important and where they see one party’s campaign is focused can also be a warning sign. A HuffPost/YouGov poll taken just before big GOP wins in the 2014 midterms, for instance, found that voters saw Republicans as sharing their concerns about the economy and Democrats as more focused on social issues. In 2016, voters ― again registering concerns about the economy ― felt that neither presidential campaign shared their priorities. Voters’ perception that Biden is most focused on health care and the coronavirus lines up well with data on his campaign’s TV ad spending. It also makes sense: Both are major concerns for voters, and areas on which he holds the advantage. Trump’s ratings for handling the coronavirus have steadily worsened throughout the year, and voters now give Biden a significant edge in trust to handle the pandemic. Trump’s perceived focus on the economy also makes sense. Aside from being a top concern for voters, it’s one of the few issues on which he continues to earn positive ratings from the public. Other issues on which he’s traditionally relied, however, have slipped out of focus. Immigration, which was the center of attention for many GOP voters in the 2018 midterms, has failed to garner similar scrutiny this year. Public safety issues have failed to break through, despite the Trump campaign’s significant expenditures on ads depicting the president as a bulwark against national unrest. Crime is neither a top issue for many voters nor something he’s perceived as having devoted significant attention to. Trump’s attacks on his rival, meanwhile, have apparently failed to do significant damage. Biden’s favorability ratings are still slightly above water among likely voters ― a shift from 2016, when both Trump and his Democratic rival, Hillary Clinton, were viewed unfavorably. Use the widget below to further explore the results of the HuffPost/YouGov survey, using the menu at the top to select survey questions and the buttons at the bottom to filter the data by subgroups: he HuffPost/YouGov poll consisted of 1,000 completed interviews conducted Oct. 22-25 among U.S. registered voters, using a sample selected from YouGov’s opt-in online panel to match the demographics and other characteristics of the population. HuffPost has teamed up with YouGov to conduct daily opinion polls. You can learn more about this project and take part in YouGov’s nationally representative opinion polling. More details on the polls’ methodology are available here. Most surveys report a margin of error that represents some but not all potential survey errors. YouGov’s reports include a model-based margin of error, which rests on a specific set of statistical assumptions about the selected sample rather than the standard methodology for random probability sampling. If these assumptions are wrong, the model-based margin of error may also be inaccurate.