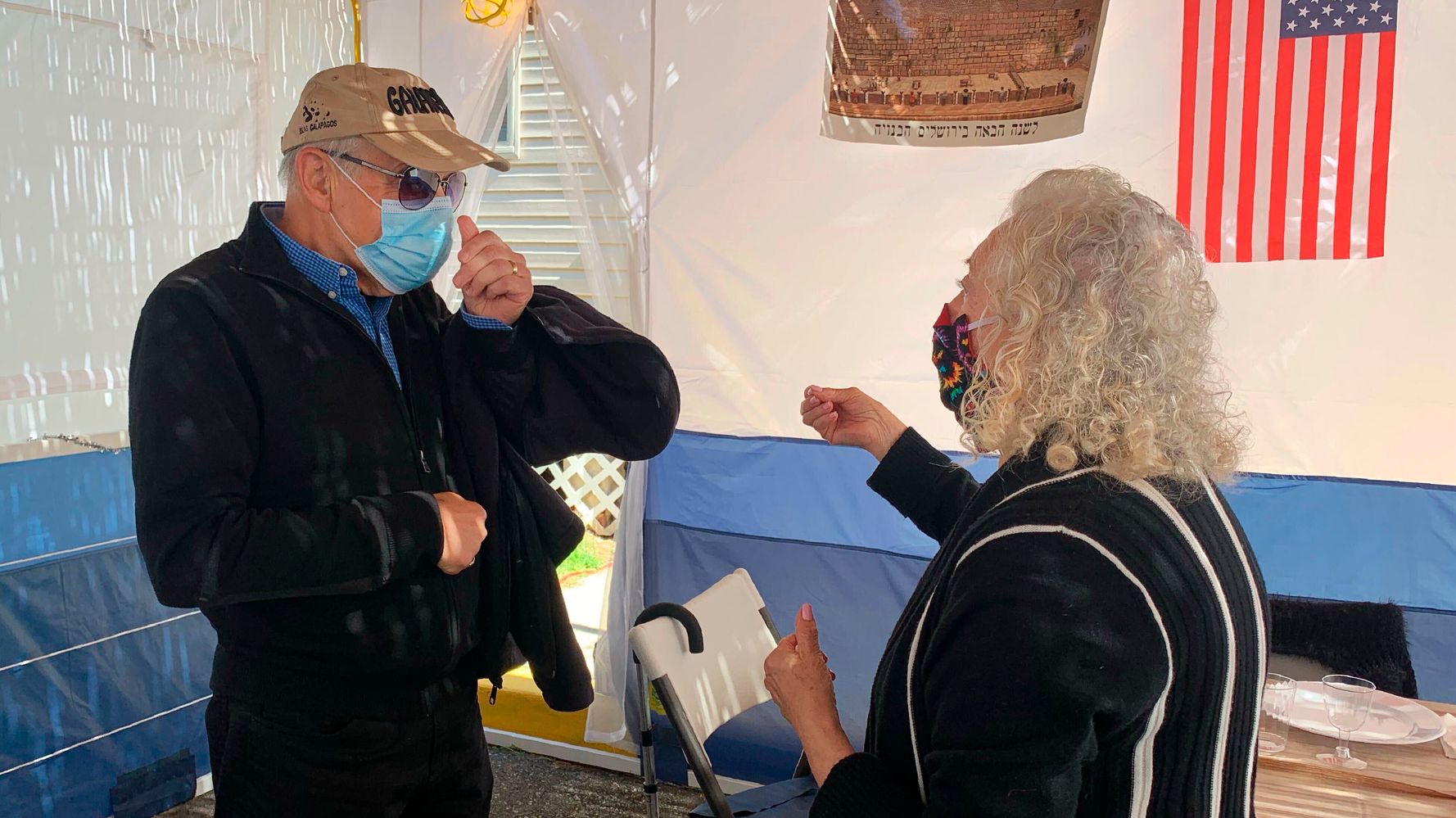 “NEW YORK (AP) — Holocaust survivors Ruth Brandspiegel and Israel “Sasha” Eisenberg call their reunion a miracle that began on the holiest day in Judaism, and it only happened thanks to a prayer service that was held virtually due to the coronavirus pandemic. Decades ago their families, who came from the same city in Poland, escaped the Nazis, crossed into the Soviet Union and were sent to different labor camps in Siberia, where Eisenberg was born. They later met at a displaced persons camp in Austria, where they became close friends. They last saw each other there, in 1949, before losing track of each other’s whereabouts. More than 70 years later, Brandspiegel, now a Philadelphia resident, heard a familiar name being called out in a Yom Kippur service held in late September via Zoom by her son’s synagogue in East Brunswick, New Jersey. “I said to myself, Sasha? I know there’s a lot of Eisenbergs, but Sasha Eisenberg? How could that possibly be?” she said. So she called son Larry Brandspiegel, a cantor at the East Brunswick Jewish Center, and asked him to help her check. “He said, ‘Oh mom, what are you talking about?’” she recalled. “I said … just take a look.’” (Ruth Brandspiegel via AP) Israel \”Sasha\” Eisenberg, left, Ruth Brandspiegel, bottom, and her son Larry Brandspiegel, right, tell stories of their time in a post-World War II displaced persons camp and rejoice in their recent reunion in East Brunswick, N.J., Tuesday, Oct. 13, 2020.  After some back-and-forth on the phone with the Eisenberg family, Larry called with the good news: It was indeed her beloved childhood friend. She had heard his name during the service because his wife, Marsha, wanted to give him a shoutout after being married for 53 years. “I even didn’t know that Regina was in America!” said Eisenberg, 79, using Brandspiegel’s original name which she adapted to Ruth after moving to America. “It’s 70 years and I was a child. … So I called it a miracle, because I don’t see any other way that humans can organize such an event and make everything come together.”  Brandspiegel was born in 1936 in Ciechanów. Her family escaped after Hitler’s invasion of Poland in 1939, which marked the onset of World War II. After some weeks in Ukraine, her family was sent to a labor camp in Siberia and later to the Ural Mountains, “where it was a little warmer.” After the war they briefly went back to Poland but left with the help of Jewish organizations to the Hallein Displaced Persons Camp in Austria, in 1946, where they befriended a family that hailed from their same hometown. The Eisenbergs had left Ciechanów in the late 1930s, fearful of the Nazis. They, too, ended up in a Siberian camp and returned to Poland briefly after the war. With many relatives dead and all their property gone, they then went to Hallein and found themselves in the same barracks as the Brandspiegels. “Of course, we were family already,” said Brandspiegel, 83. “Mishpacha,” she added, using the Hebrew word for family. Eisenberg’s father died in a car accident in 1948, and he still remembers how Brandspiegel’s dad, “a pious, religious man,” helped him through his grief by reciting with him the Kaddish, the Jewish prayer for the dead. “A thing like this, you don’t forget,” Eisenberg said. “So it was very emotional for me. And even as I speak now, I kind of tremble a little bit about it.” The following year his mother decided to take the family to Israel, where he lived in a kibbutz and served in the military before moving to Brooklyn in 1964. During the daytime he worked at a sweater factory as a floor boy. He improved his English at night school, and studied architecture and civil engineering at Pratt Institute. He and his wife had two children: Alissa, a teacher, and Kevin, a lawyer. Meanwhile Brandspiegel’s family had moved to Philadelphia in 1952. She attended high school and worked as a bookkeeper before marrying in 1957 at age 21. The couple opened a children’s clothing store and had three children: Flora, Debbie and Larry. So for years the long-lost friends were unknowingly living less than 60 miles apart. On Oct. 3, they were finally reunited. Larry Brandspiegel via AP Holocaust survivors Israel \”Sasha\” Eisenberg, left, and Ruth Brandspiegel are reunited on Oct. 3, 2020, in East Brunswick, N.J. for the first time in more than 70 years since their families left the Hallein Displaced Persons Camp in Austria.  Brandspiegel’s son hosted a socially distanced gathering at his home in East Brunswick under a sukkah, a temporary shelter used to observe the seven days and nights of the Jewish fall holiday Sukkot. For hours, they chatted, reminisced and looked at black-and-white photos from decades past. Both families cried joyful tears. “It’s a shame that we weren’t able to hug under these circumstances,” Brandspiegel said. “But it was something that I never expected, and this was something that gave me so much pleasure that I’m just crying. … Sasha, Never forget that moment.”