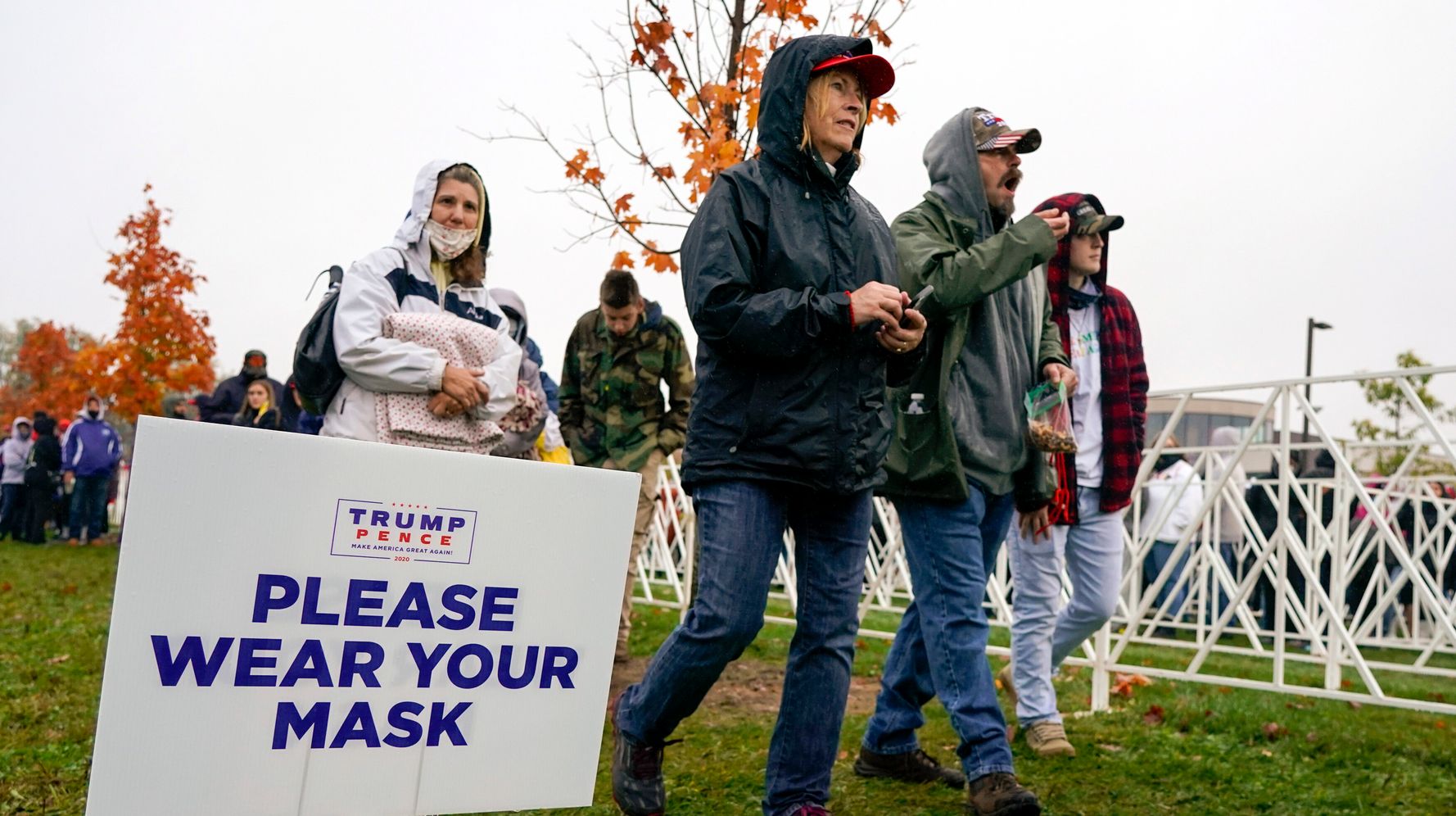 “Chris Szagola/ASSOCIATED PRESS Supporters walk by a sign reminding them to wear a face mask as they arrive to hear President Donald Trump speak Monday at a campaign rally in Allentown, 펜실베니아. With less than a week of campaigning to go, voters give President Donald Trump a poor verdict on his handling of the coronavirus outbreak, a new HuffPost/YouGov survey finds. Voters disapprove, 55% to 40%, of the U.S. government’s handling of issues relating to the coronavirus. By an even broader margin, 59% to 38%, voters disapprove of Trump’s own handling of the pandemic. Just 13% of voters say Trump’s handling of the coronavirus has been better than his handling of most other issues, with 45% saying it’s been about the same and 37% that he’s handled it worse than most other issues. Views remain deeply polarized but are more cohesively so among Trump’s opponents. An 84% majority of Democratic voters say they strongly disapprove of Trump’s handling of the issue, compared with the 55% of Republican voters who strongly approve. Democratic voters mostly say Trump’s work on coronavirus has stood out as worse than his work on other issues. A majority of Republican voters say he’s handled it about as well as other issues, with fewer than 3 ~에 10 saying he handled it better than most. Last spring, as the pandemic first descended on the U.S., the government’s response looked like a relatively bright spot for the Trump administration. Americans’ approval of the federal response to the coronavirus reached as high as 57% in late March. Trump’s approval rating on the issue reached the 50% mark around that time, higher than his overall approval ratings. But ratings for both Trump and the federal government sank by May and have not recovered. Voters are increasingly dissatisfied with the way the U.S. has responded in comparison with other countries. Half say the U.S. has done a worse job of handling the outbreak than most other countries, up from 29% of voters who said the same in March and 42% who said so in May. Throughout the year, Democratic presidential nominee Joe Biden has been convincing voters that he’d be the better alternative. By a 15-percentage-point margin, 50% to 35%, voters now say they think Biden would do a better job than Trump of handling the country’s coronavirus outbreak, with the remainder unsure or believing both men would do about the same. That marks a significant shift since late March, when voters were about evenly split over which candidate would do a better job, with 40% saying Biden and 39% that Trump would. ㅏ 59% majority say that the Biden campaign’s attitude toward taking coronavirus precautions has been about right, while 58% of voters say that the Trump campaign has taken too many risks. It’s clear that the Trump administration’s handling of the pandemic is deeply unpopular. What’s less clear is exactly how much of an effect that’s had on the dynamics of this election. The pandemic likely hasn’t been far from most voters’ minds this year, especially with unprecedented numbers voting early or by mail-in ballot at least in part because of health concerns. ㅏ 64% majority say they expect the outbreak to have a lasting effect on the country, with only about a quarter believing things will soon get back to normal. Roughly three-quarters of voters say they’re at least somewhat concerned about the spread of the coronavirus in the United States. Two-thirds say that the issue of the coronavirus outbreak will be at least somewhat important to their vote, with 42% calling it very important. On surveys of voters’ top issues, the coronavirus itself regularly polls near or behind perennial top issues like the economy and health care ― both of which, 물론이야, have been severely affected by the pandemic. At the same time, measurements of the campaign have remained almost aggressively stable. Trump entered 2020 behind in the polls and facing underwater ratings. In FiveThirtyEight’s polling aggregate, Trump started this year with an average 42.6% approval rating. After a modest summertime dip and recovery, it currently stands at 43.2%. CNN’s national polling, which found Biden leading Trump by 10 points among registered voters in October 2019, now has Biden up by a very similar 12 points. The intervening year, and the pandemic it brought, may not have changed many minds about Trump’s performance in office. But the ongoing centrality of the coronavirus in the campaign ― despite the Trump camp’s attempts to push the campaign onto other issues ― has given the president little leeway to turn things around. The HuffPost/YouGov poll consisted of 1,000 completed interviews conducted Oct. 23-27 among U.S. registered voters, using a sample selected from YouGov’s opt-in online panel to match the demographics and other characteristics of the population. HuffPost has teamed up with YouGov to conduct daily opinion polls. You can learn more about this project and take part in YouGov’s nationally representative opinion polling. More details on the polls’ methodology are available here. Most surveys report a margin of error that represents some but not all potential survey errors. YouGov’s reports include a model-based margin of error, which rests on a specific set of statistical assumptions about the selected sample rather than the standard methodology for random probability sampling. If these assumptions are wrong, the model-based margin of error may also be inaccurate. Everyone deserves accurate information about COVID-19. Support journalism without a paywall — and keep it free for everyone — by becoming a HuffPost member today. A HuffPost Guide To Coronavirus Here’s the latest science on COVID antibodies. How does the coronavirus spread differently than the flu? What does the new CDC definition of a COVID-19 “close contact” mean for you? Is it safe to see grandparents for the holidays? Therapists predict how this year will shape our mental health.

["FRANKFURT, 11월 25 (로이터) - The owner of a Frankfurt restaurant is staging a protest against the coronavirus lockdown in Germany by filling his tables with a hundred stuffed toy pandas, in a play on the word “pand...