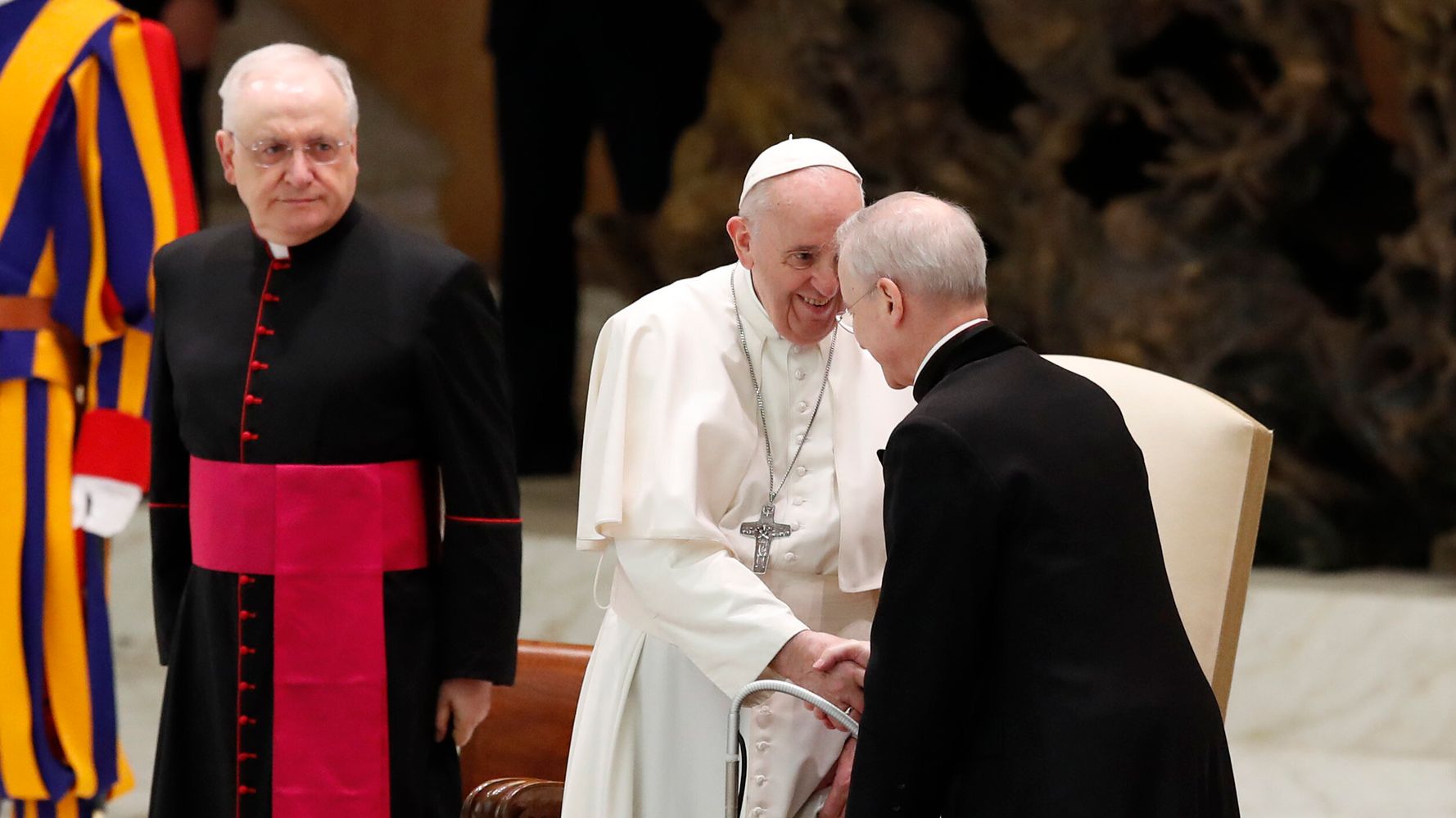 “VATICAN CITY (AP) — Pope Francis has blamed “this lady called COVID” for forcing him to keep his distance again from the faithful during his general audience, which was far smaller than usual amid soaring coronavirus infections in Italy. Francis again eschewed a protective mask Wednesday even when he greeted a few maskless clergymen at the end of his audience. While the prelates wore masks throughout the hour-long audience, they took them off when they lined up to shake Francis’ hand and speak briefly with him one-on-one. A Vatican official who is a key member of Francis’ COVID-19 response commission, the Rev. Augusto Zampini, acknowledged Tuesday that at age 83 and with part of his lung removed after an illness in his youth, Francis would be at high risk for complications if he were to become infected. Zampini said he hoped Francis would don a mask at least when he greeted people during the general audience. “We are working on that,” he said. (AP Photo/Alessandra Tarantino) Pope Francis shakes hands with Monsignor Luis Maria Rodrigo Ewart as he arrives in the Paul VI Hall at the Vatican for his weekly general audience, Wednesday, Oct. 28, 2020.  Francis has only been seen wearing a mask in public twice: On Sept. 9 as he entered and exited his general audience, and last week during a two-hour interfaith prayer service in downtown Rome. While Francis’ lung condition could explain his reluctance to wear a mask, there has been no comment from the Vatican about why protocol officials allow other people to get close to him without donning face protection. People who have had private meetings with him recently said no masks were worn and no proof of recent negative virus tests required. Vatican regulations require masks indoors and out when social distancing cannot be guaranteed. At the start of the audience, Francis again apologized that he wouldn’t descend into the crowd to greet well-wishers because he said doing so would create a crowd around him. “And this goes against the precautions we need before this lady called COVID, who does us so much harm,” Francis said from the stage of the Vatican auditorium. “For this reason, please forgive me that I don’t go down to greet you. I greet you from here and I keep you in my heart, and please keep me in your heart and pray for me.” Franco Origlia via Getty Images Pope Francis delivers his blessing to the faithful in a partially empty Paul VI Hall during his weekly general audience on October 28, 2020 in Vatican City, Vatican.  Italy, the first country in the West to be slammed by the pandemic, has seen a sharp rebound in infections in recent weeks that prompted the government to close restaurants and bars at night and shutter theaters, gyms and pools. Public health officials are urging people to stay home as much as possible. Francis’ audience — which in pre-pandemic times would draw thousands of people each week to St. Peter’s Square or the auditorium — featured only a few hundred people Wednesday.