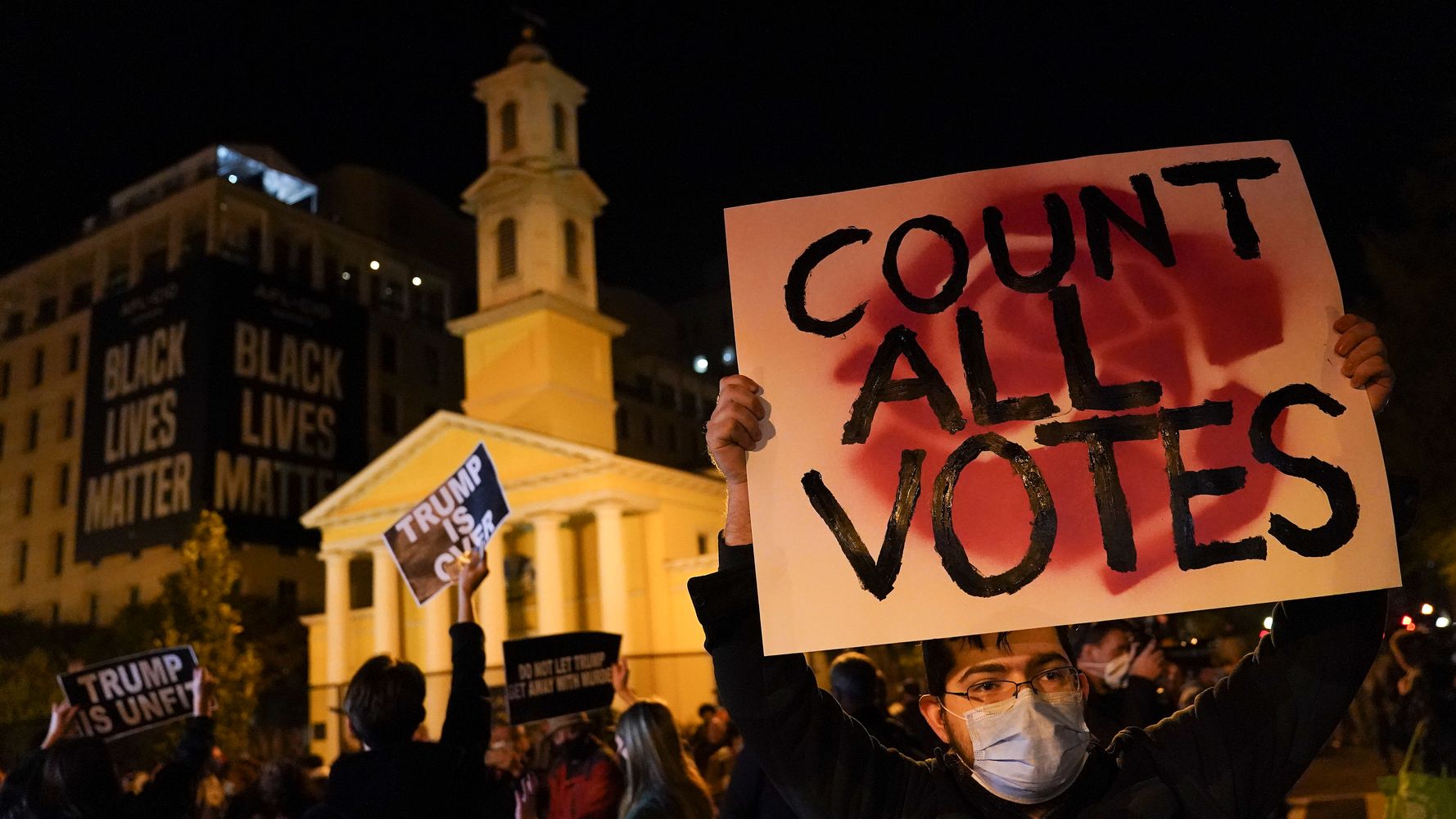 “华盛顿 (美联社) — More than 1,000 people protesting President Donald Trump converged on Black Lives Matter Plaza on Tuesday night, just a block from the White House, while hundreds more marched through parts of downtown Washington, sometimes blocking traffic and setting off fireworks. Scattered protests also took place from Seattle to New York City, but across the U.S. there were no signs of serious violence or widespread unrest in the hours immediately after the polls closed, with the outcome still unknown. The demonstrations in Washington were largely peaceful, with people shouting, “Whose streets? Our streets!” and “If we don’t get no justice, they don’t get no peace!” Groups of teenagers danced in the street as onlookers cheered. Large banners, including one reading “Trump lies all the time,” were unfurled. At one point, the marchers stabbed the tires of a parked police van to flatten them. Hundreds of people marched in anti-Trump demonstrations in Portland, Oregon, and Seattle, with several arrested. AP Photo/John Minchillo A demonstrator holds up a sign while waiting for election results at Black Lives Matter Plaza, 十一月. 3, 2020, 在华盛顿. “This is what democracy looks like,” protesters chanted in Portland, where organizers said the demonstration would be peaceful and that regardless of the presidential election result, they would continue protesting in support of racial justice. The sheriff’s office said some protesters were openly carrying guns. Oregon Gov. Kate Brown had put the National Guard on standby, since Portland has seen almost nightly protests since the death of George Floyd under a Minneapolis police officer’s knee in May. Portland Mayor Ted Wheeler said on Twitter that there would be “no tolerance for any violence, intimidation or criminal destruction,” and that people should be “safe while using their voice to advocate for their perspective.” In Seattle, police said they arrested several people, including someone who put nails in a road and another who drove over a barricade and into a police bike lane. No one was injured. Hundreds of businesses in cities across the U.S. boarded up their doors and windows ahead of the election, fearing the vote could lead to the sort of violence that broke out after Floyd’s death. “Some people would like to cause mayhem and trouble,” Washington Mayor Muriel Bowser said earlier in the day. She said she had never seen so many businesses being boarded up: “That all saddens me.”

["BANGKOK (美联社) — Thailand’s indefatigable pro-democracy activists took to Bangkok’s streets again Sunday, this time to protest the army as they push forward with their campaign for sweeping reforms, including to the n...