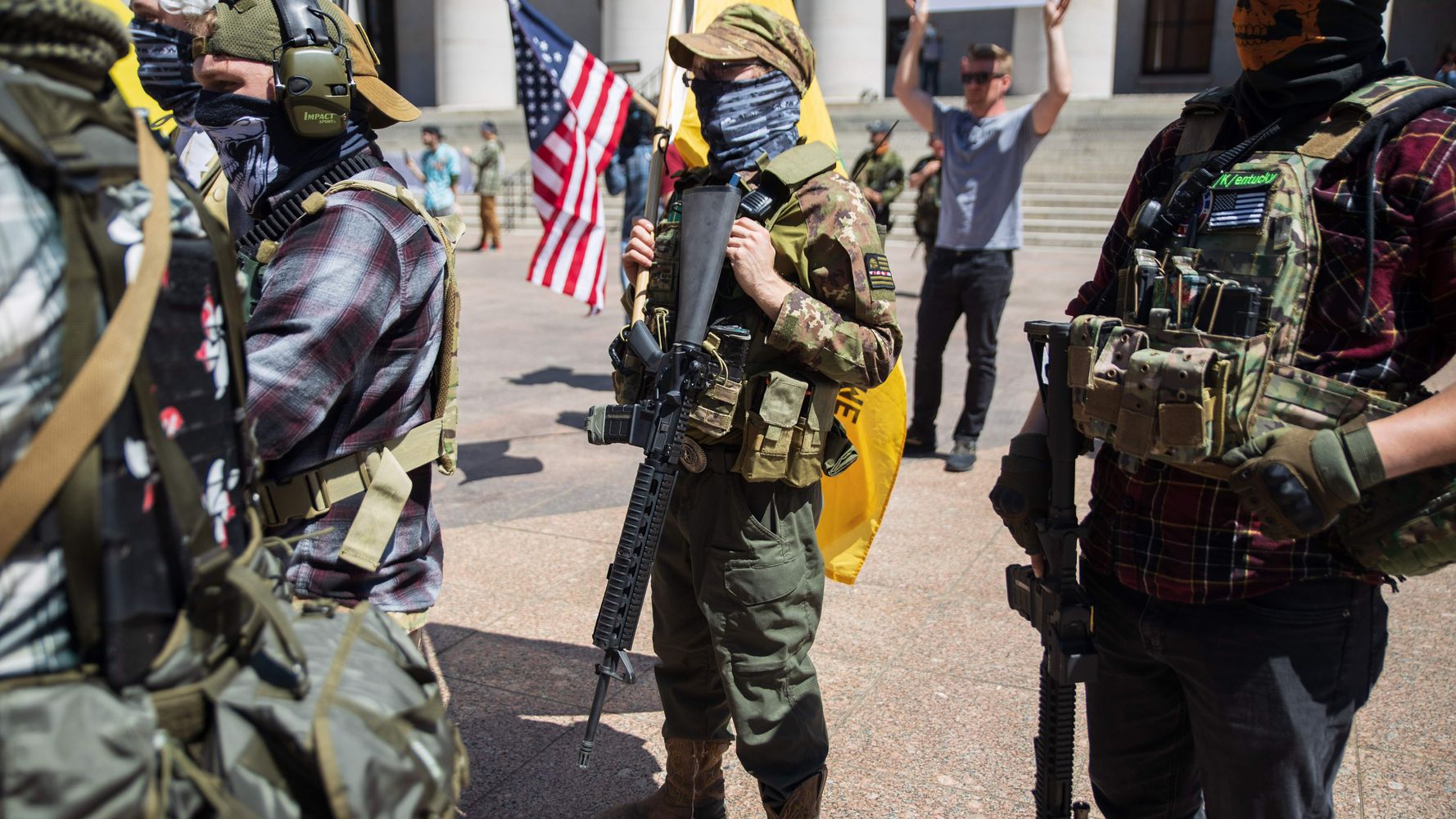 “Militia groups “pose a serious threat to the safety and security of American voters,” particularly in the nation’s swing states, according to a joint report from the Armed Conflict Location & Event Data Project (ACLED) and MilitiaWatch. Over the past several months, private militias “have become more assertive,” the two organizations found in a report published Thursday, titled “Standing By: Right-Wing Militia Groups & The US Election.” The report cites kidnapping plots targeting elected officials and interventions in protests throughout the country. Parts of Georgia, 미시간, Pennsylvania, Wisconsin and Oregon are at the highest risk of increased militia activity around the election, it says, while parts of North Carolina, Texas, 여자 이름, California and New Mexico are at a moderate risk. The report identifies the Three Percenters, Patriot Prayer, Proud Boys and Boogaloo Bois as groups that pose a “high” or “very high” potential for violence. The report’s authors wrote that there’s been “a major realignment” of U.S. militia activity. While these groups have traditionally been anti-government, several of them have largely rallied behind a single political leader: 도날드 트럼프. The president has urged his supporters to go to polling sites during this election “and watch very carefully,” a directive likely to inspire far-right militia members, who see themselves as soldiers in a civil war. Asked to condemn the Proud Boys at a debate last month, Trump instead told them to “stand back and stand by,” a directive the neo-fascist group publicly interpreted as marching orders. When militia members were arrested earlier this month for plotting to kidnap Michigan’s Democratic governor, Gretchen Whitmer, the president seemed to delight in their animus toward her, encouraging a “lock her up” chant at a campaign rally in the state days later. His son Donald Trump Jr. has asked “every able-bodied man, woman to join the Army for Trump’s election security operation,” an effort to recruit poll watchers who believe Democrats are trying to steal the election. ACLED and MilitiaWatch, which found that militia activity has been reported in at least 34 states and Washington, DC, since May, identified specific factors that increase the risk of election-related militia activity in certain states. ACLED is a nonprofit that monitors global political violence and MilitiaWatch is an online publication that tracks militia activity in the U.S. Militia activity is expected to be higher in competitive spaces like swing states, the report found, where armed groups may work to repress votes for Trump’s opponents. Armed groups appear to be particularly active in areas where there have been protests against the lockdowns aimed at limiting the spread of the coronavirus — an effort militias perceive as an assault on their freedom — and places that have seen Black Lives Matter protests — which militias view as “leftist coup” activities. Locations where militia members have friendly relationships with members of law enforcement are likely to see higher levels of militia activity, the report found. In Kenosha, Wisconsin, law enforcement officers were recorded on video handing water to a group of militia members and telling them, “We appreciate you guys, we really do,” shortly before 17-year-old vigilante Kyle Rittenhouse fatally shot two people in late August. So far this year, right-wing extremists have accounted for two-thirds of domestic terrorist attacks and plots, a counterterrorism expert at the Center for Strategic and International Studies found in a report also issued this week. Several of these plots were organized on Facebook. The social media giant is currently facing a civil lawsuit for permitting the event page used to recruit armed militants to Kenosha to remain online, despite the page being reported 455 times for violating the platform’s rules. In August, about a week before the Rittenhouse shootings, Facebook announced that it would “restrict” the ability of militia groups to organize on its platform, and the following month it updated its policy to ban users “from running ads that praise, support or represent militarized social movements.” The company has been more aggressive in removing militia groups and pages since then, but far-right extremists have continued to organize on the platform. Often, Facebook only removes banned content when a reporter or outside group flags it for them. Faced with the prospect of armed militia members showing up at polling locations, state election officials have scrambled to find additional ways to prevent voter intimidation. Last week, Michigan Secretary of State Jocelyn Benson announced a ban on open carry of firearms within 100 feet of polling places on Nov. 3, a recognition of the fact that visibly toting a gun around is an easy way to intimidate others. Benson’s move was a common-sense and seemingly innocuous response to the volatile political climate — about a dozen states already ban open and/or concealed carry at the polls. But it was met with immediate backlash from the right. Several sheriffs and an association of police chiefs in Michigan said they wouldn’t enforce the ban. On Thursday, a coalition of pro-gun groups sued to prevent its enforcement, claiming that gun-owners were actually the ones facing intimidation. The “practical effect” of Benson’s policy, the plaintiffs alleged, was to “disenfranchise” Second Amendment-supporting voters. But it’s unclear why people would need a visible weapon to cast their vote at a polling location — places that are already subject to plenty of restrictions around otherwise constitutionally protected activity in order to create a safe and intimidation-free environment for voters. Asked why the right to have a visible firearm at a polling location on Election Day was important enough to fight for it in court, Steve Dulan, the second vice chair of the Michigan Coalition for Responsible Gun Ownership, conceded it was a fight based on the principle rather than real concerns about self-defense. “We just disagree with the idea that the secretary of state, any secretary of state, can just announce new law in this way, too.”