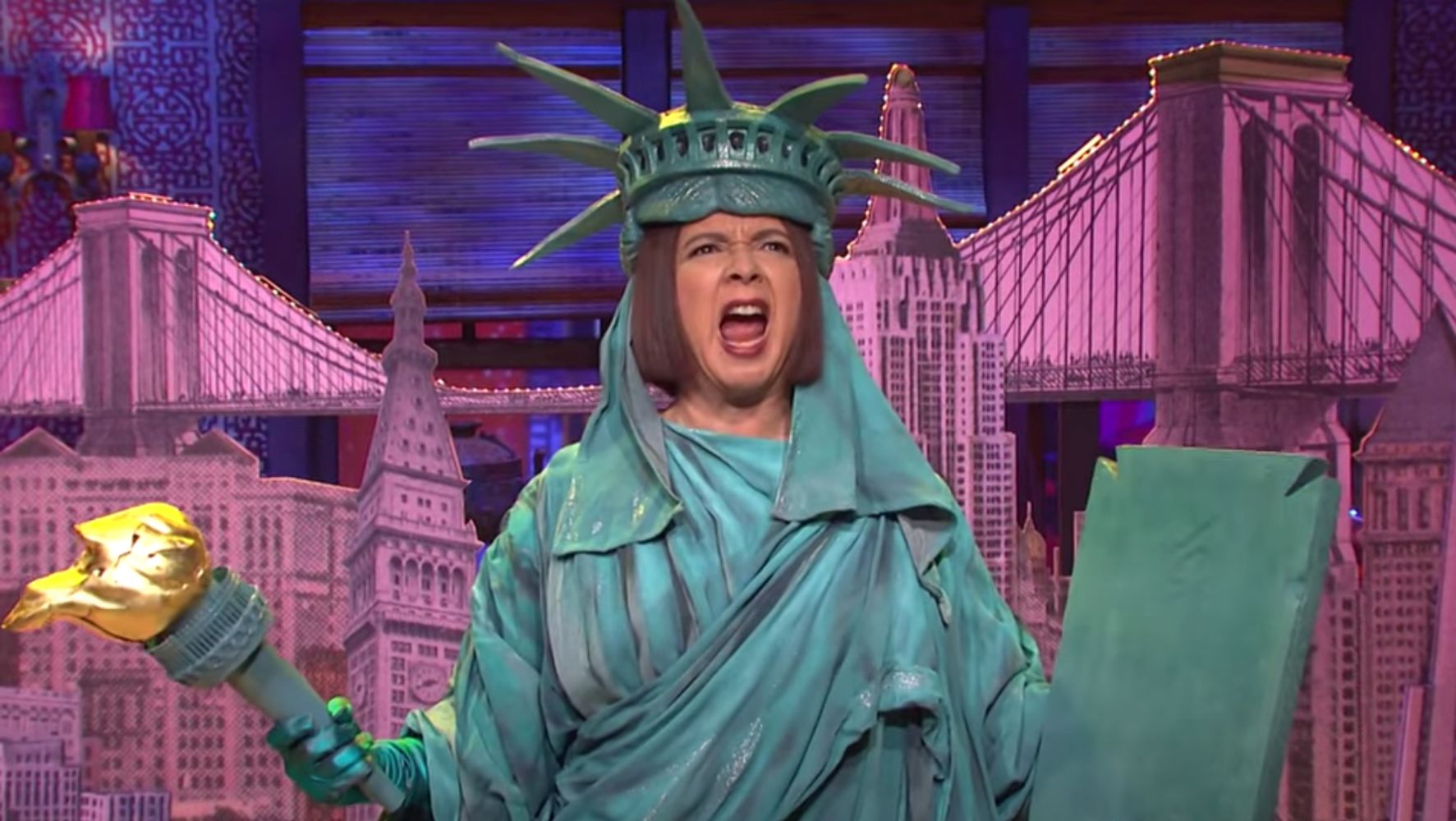 “NBC via Getty Images New York City is famously not a ghost town on \”Saturday Night Live.\” New York City never looked more alive than during an all-star musical tribute on this weekend’s “Saturday Night Live.” Returning as host for a fourth time in four seasons, John Mulaney expanded his NYC-themed theatrical universe to showcase a Times Square souvenir shop in all its gritty and unheralded glory, following in the footsteps of the now-iconic sketches “Diner Lobster,” “Bodega Bathroom” and “Airport Sushi.” This time around, egter, the eight-and-a-half-minute sketch titled “New York City Musical” packed an extra punch after President Donald Trump labeled the city as a “ghost town” during the final presidential debate in October. While the costumed characters that populate the typically bustling tourist district have certainly fallen on some hard times during the COVID-19 pandemic, they proved resilient as ever in a song-and-dance number. It all began when a customer played by Pete Davidson asked to try on a used pair of “I ❤️NY” underwear much to Mulaney’s shop clerk’s surprise, as the fitting room happened to be in “the back of the store where the people of Times Square habitate.” Cue Kenan Thompson as a “Times Square Minion” launching into a rendition of the Broadway classic “Luck Be a Lady” called “Mascots Be Shady,” in which he’s joined by a downtrodden Elsa from “Frozen” and a singing Minnie Mouse. Not deterred by the display, egter, Davidson, nearly breaking character, said he still wanted to make the purchase, joking, “I love New York, and I want my modest bulge to show that.” So out came a can-can line of characters to the tune of “One” from “A Chorus Line,” and then Kate McKinnon as Shrimp Louie, the Bubba Gump Shrimp mascot, who delivered a devastating “Send in the Clowns” parody, “Send in the Crowds.” My sexual preference is definitely Maya Rudolph on #SNL singing Sondheim’s \”I’m Still Here\” but with changed lyrics that included a Bethenny Frankel reference, all while dressed as the Statue of Liberty. (What can I say, I’m picky!) pic.twitter.com/U7QEaQ4dvC— Dave Quinn (@NineDaves) November 1, 2020 But the real show stopper was Maya Rudolph as a beleaguered Lady Liberty. “Fools, you don’t give up on my city that easy,” she said before performing a reworked version of Stephen Sondheim’s “I’m Still Here.” “I lived through war haul. I lived through Bethenny Frankel. But I’m here,” she sang. “I lived through Times Square filled with whores and now they’re on ‘Sex & The City’ tours. My first apartment was a drawer, but I’m here.” After a brief appearance from Chloe Fineman as a woman from Westchester with “visible” COVID-19 signs, Mulaney explained that the underpants are ultimately a symbol for a divided America. “Sekerlik, these underpants are riddled with ugliness and disease, but they still stand for something: love," hy het gesê, before launching into an election-themed final number. “That’s why I didn’t want to sell them; because they give me hope.”