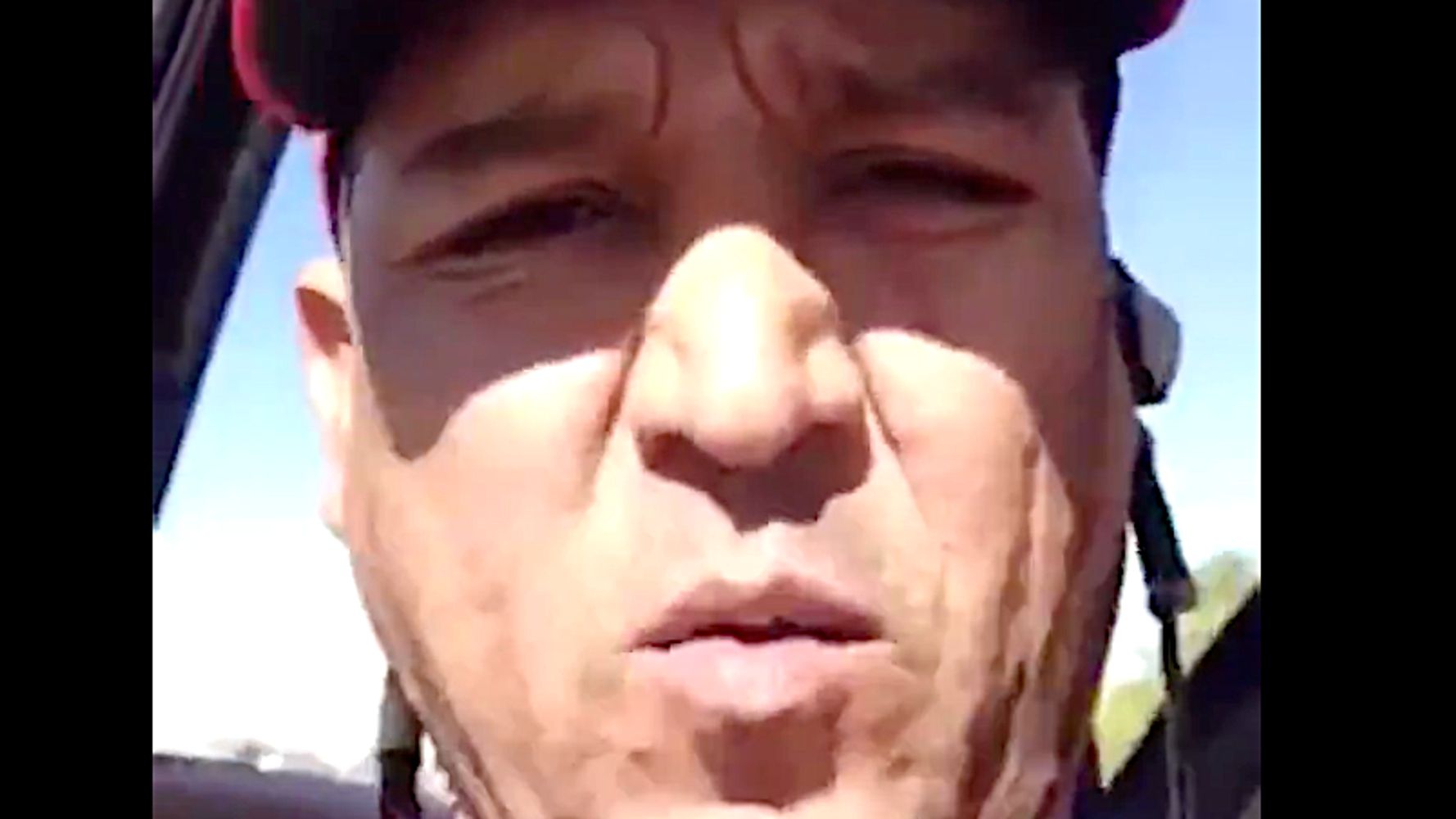 “A Texas man who appeared to claim on social media accounts to be the “Trump train” driver who rammed a vehicle last week in a Joe Biden campaign caravan also had been videotaped driving through Black Lives Matter protesters in Texas this summer. Scores of pickups bristling with “Make America great again” signs and flags swarmed the Biden bus caravan on a busy Texas interstate Friday. One of the trucks was videotaped colliding with a vehicle in the caravan to force it out of its lane. The campaign subsequently canceled events because of safety fears. Biden had not been on the campaign bus. Credit for the collision was posted on Eliazar Cisnernos’s Facebook page (which has since been deleted): “That was me slamming that fucker … hell yea.” Screen Shot/Facebook/Eliazar Cisneros President Donald Trump has hailed the harassing drivers as “patriots.” Cisneros retweeted Trump’s message “I love Texas” over a video of the highway confrontation. The FBI has launched an investigation into the freeway intimidation. Later comments on Cisneros’s page said that he “reacted” to the other vehicle in the Trump train confrontation, included a laughing emoji response to a commenter’s suggestion he get an “All Lives Splatter” sign showing a truck plowing through pedestrians. Screen Shot/Twitter/Eliazar Cisneros The posts on Cisneros’s Twitter account also included a sarcastic welcome to the campaign caravan after the collision on Twitter, offering “sausage, leg quarters … en 35 inch] tires.” Screen Shot/Twitter/Eliazar Cisneros Eliazar Cisneros offers wheels to the Biden campaign Last year, Cisneros posted a photo of an automatic rifle, calling it an “Antifa Meat Tenderizer.” Screen Shot/Social Media/Eliazar Cisneros The black Ford F-150 pickup that collided with the Biden campaign car appears to be the same one Cisneros drove through a group of Black Lives Matter protesters in San Antonio in June. He told KENS-TV then that he was driving around town “waving my flags and showing support for my president,” and wanted the protesters to “get off the street, get on the sidewalk.” He drove slowly, and no one was injured. Demonstrators yelled at him and accused him of putting their lives at risk. Cisneros could not be reached for comment. The FBI did not respond to a HuffPost request for comment on Cisneros. Cisneros was also featured in a local TV report in June patrolling the streets of San Antonio with an automatic weapon, saying he was trying to protect the city from protesters. It is clear this man wants to be a cop, but can’t. So he has resorted to vigilante-style justice. He uses his truck as a weapon to intimidate and scare anyone he deems unfit. He is a terrorist that needs to be taken off our streets. https://t.co/mtPlOjkAXY— Joel Montfort 🌊 (@jmontforttx) November 2, 2020 Asked then when he would use his firearm, he told San Antonio’s WOAI-TV that he and his partner would “push” vandals off, but “once bricks start flying or being threatened with our lives, yeah.” 🎥: Newly discovered video shows Eliazar Cisneros wearing a red Trump hat and waiting in ambush on the side of Interatate 35 in Texas. Eliazar laughs maniacally during the video as the Biden/Harris bus passes by and then says, “Welcome to Texas” before jumping in his truck. pic.twitter.com/0gI51N2lHq— Resist Programming 🛰 (@RzstProgramming) November 1, 2020