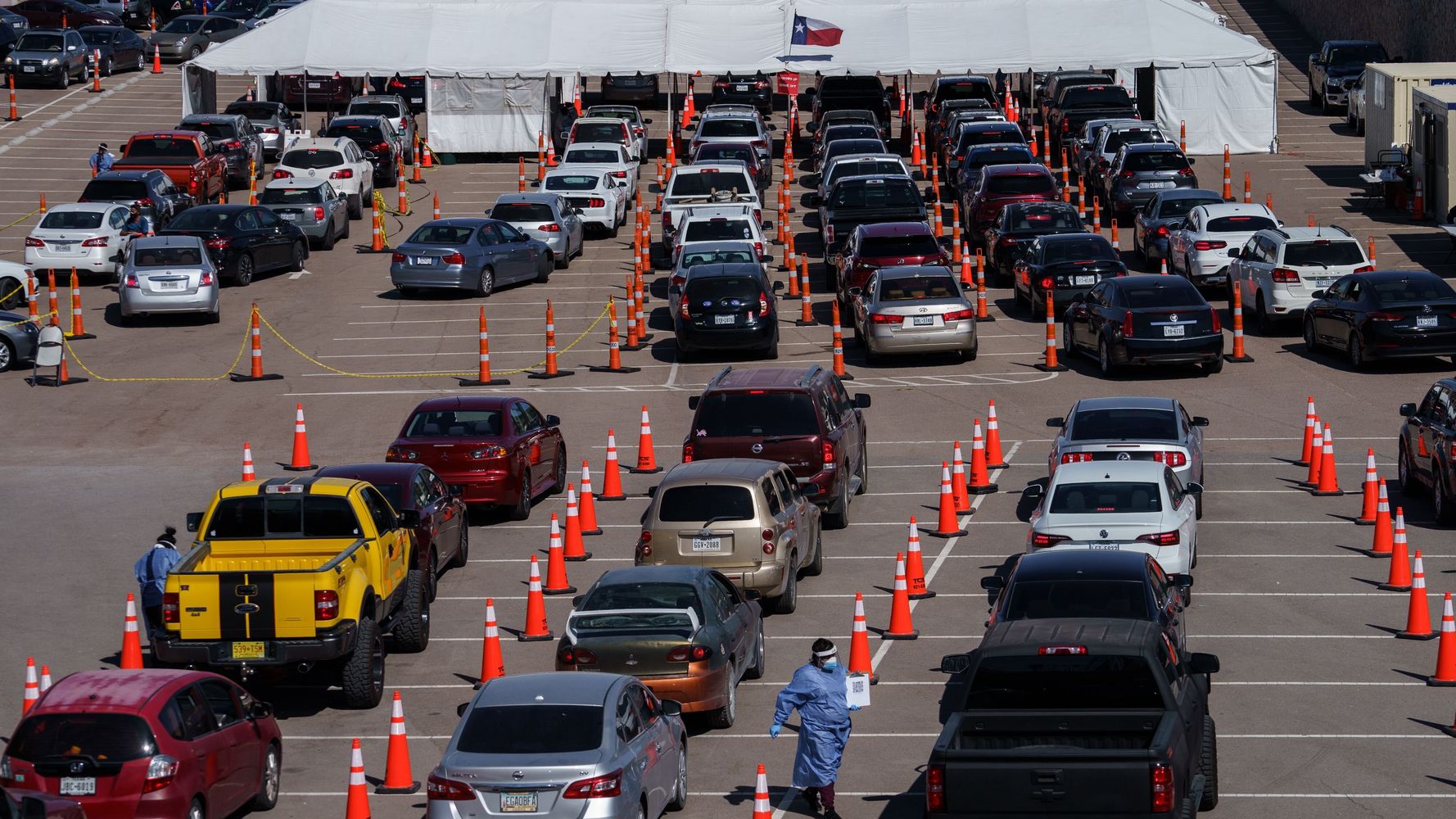 “AUSTIN, Texas (AP) — Texas has surpassed California in recording the highest number of positive coronavirus tests in the U.S. so far, according to data from Johns Hopkins University. As the coronavirus pandemic surges across the nation, the data from Sunday — the most recent available — says that there have been 938,503 cases in Texas, the nation’s second-most populous state. Kalifornië, the most populous state, has had 938,119 cases, followed by Florida with 812,063. The true number of infections is likely higher because many people haven’t been tested, and studies suggest people can be infected and not feel sick. Cengiz Yar via Getty Images An attendant talks to a person waiting in their car at a coronavirus testing site in El Paso, Texas, on Oct. 31. Meer as 29 million people live in Texas. The state’s cases per 100,000 population is 3,269.84. By comparison, California — home to more than 39 million people — has a rate of 2,371.56 cases per 100,000. A summer surge of cases overwhelmed hospitals in Houston and along the hard-hit border with Mexico. But in the fall case numbers dipped, and Gov. Greg Abbott began relaxing some coronavirus restrictions, allowing restaurants and gyms to let more people inside. He also let county leaders decide if they wanted to reopen bars at 50% capacity. But cases and hospitalizations are once again on the rise. PAUL RATJE via Getty Images Cars line up for COVID-19 tests at the University of Texas-El Paso on October 23. The city has seen a surge in cases. The Johns Hopkins data shows that Texas’ seven-day rolling average of the positivity rate has risen over the last two weeks from 7.12% aan 10.72%. Nationwide, the positivity rate was 6.6%. The seven-day rolling average of daily new cases in Texas rose from about 4,470 new cases per day to about 6,070. Active cases were estimated at 105,658, the most since Aug. 26, en 63.5% more than when active cases bottomed out on Sept. 20. Almost 5,800 COVID-19 hospitalizations were reported in Texas Monday, 87.3% more than at the Sept. 20 low point. Texas health officials have reported more than 18,000 deaths so far from COVID-19. Go Nakamura via Getty Images Medical staff members treat a patient suffering from COVID-19 in the COVID-19 intensive care unit at the United Memorial Medical Center in Houston on October 31. In recent weeks new hot spots have emerged in places including the rural upper Midwest and along the U.S.-Mexico border El Paso, where Texas Gov. Greg Abbott has sent additional medical personnel and equipment. Last Thursday, El Paso County officials ordered a two-week shutdown of nonessential activities after the area’s medical resources were overwhelmed by COVID-19 cases. El Paso County Judge Ricardo Samaniego says they’re struggling to find space for the increasing number of people dying and are setting up a fourth mobile morgue unit at the medical examiner’s office. Samaniego said Monday that the county had a backlog of more than 90 deaths that needed to be investigated. For most people, the coronavirus causes mild or moderate symptoms, such as fever and a cough that clear up in two to three weeks. For some, especially older adults and people with existing health problems, it can cause more severe illness, including pneumonia and death.