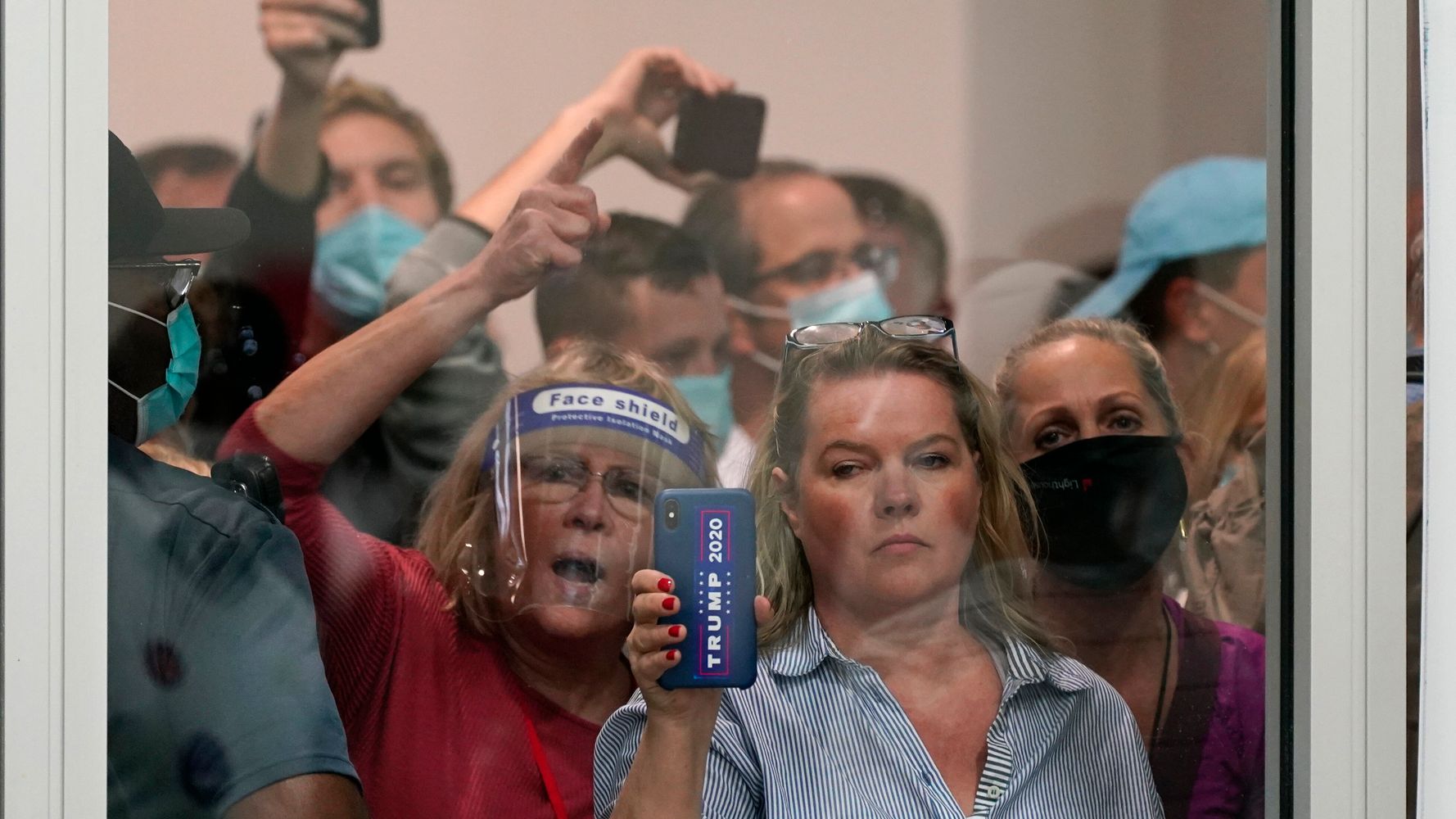 “Dozens of angry supporters of President Donald Trump converged on vote-counting centers in Detroit and Phoenix as the returns went against him Wednesday in the two key states, while thousands of anti-Trump protesters demanding a complete tally of the ballots in the still-undecided election took to the streets in cities across the U.S. “Stop the count!” the Trump supporters chanted in Detroit. “Stop the steal!” they said in Phoenix. The protests came as the president insisted without evidence that there were major problems with the voting and the ballot counting, especially with mail-in votes, and as Republicans filed suit in various states over the election. Wearing Trump gear, the Phoenix protesters filled much of the parking lot at the Maricopa County election center, and members of the crowd chanted, “Fox News sucks!” in anger over the network declaring Joe Biden the winner in Arizona. Rep. Paul Gosar, an Arizona Republican and staunch Trump supporter, joined the crowd, declaring: “We’re not going to let this election be stolen. Period.” However, observers from both major political parties were inside the election center as ballots were processed and counted, and the procedure was live-streamed online at all times. AP Photo/Carlos Osorio People wanting to be election challengers yell as they look through the windows of the central counting board as police were helping to keep additional challengers from entering due to overcrowding, on Nov. 4, 2020, in Detroit. Several sheriff’s deputies blocked the entrance to the building. And the vote-counting went on into the night, Maricopa County Elections Department spokeswoman Megan Gilbertson said. Two top county officials — one a Democrat, the other a Republican — issued a statement expressing concern about how misinformation had spread about the integrity of the election process. “Everyone should want all the votes to be counted, whether they were mailed or cast in person,” said the statement signed by Clint Hickman, the GOP chair of the Maricopa County Board of Supervisors, and Democratic Supervisor Steve Gallardo. “An accurate vote takes time. … This is evidence of democracy, not fraud.” Meanwhile, from New York City to Seattle, thousands of demonstrators turned out to demand that every vote be tallied. In Portland, Oregon, which has been a scene of regular protests for months, Gov. Kate Brown called out the National Guard as demonstrators engaged in what authorities said was widespread violence downtown, including smashing windows. Protesters in Portland were demonstrating about a range of issues, including police brutality and the counting of the vote. “It’s important to trust the process, and the system that has ensured free and fair elections in this country through the decades, even in times of great crisis,” Brown said in a statement. “We are all in this together.” Richard March came to an anti-Trump demonstration in Portland despite a heart condition that makes him vulnerable to COVID-19. “To cast doubt on this election has terrible consequences for our democracy,” he said. “I think we are a very polarized society now — and I’m worried about what’s going to come in the next days and weeks and months.” In New York, hundreds of people paraded past boarded-up luxury stores on Manhattan’s Fifth Avenue, and in Chicago, demonstrators marched through downtown and along a street across the river from Trump Tower. Similar protests — sometimes about the election, sometimes about racial inequality — took place in at least a half-dozen cities, including Los Angeles, Houston, Pittsburgh, Minneapolis and San Diego. The confrontation in Detroit started shortly before The Associated Press declared that Biden had won Michigan. Video shot by local media showed angry people gathered outside the TCF Center and inside the lobby, with police officers lined up to keep them from entering the vote-counting area. They chanted, “Stop the count!” and “Stop the vote!” Earlier, the Republican campaign filed suit in a bid to halt the count, demanding Michigan’s Democratic secretary of state allow in more inspectors. Michigan Attorney General Dana Nessel, a Democrat, insisted both parties and the public had been given access to the tallying, “using a robust system of checks and balances to ensure that all ballots are counted fairly and accurately.” Michigan has been on edge for months over fears of political violence. Anti-government protesters openly carried guns into the state Capitol during protests over coronavirus restrictions in the spring, and six men were arrested last month on charges of plotting to kidnap Democratic Gov. Gretchen Whitmer On Election Night, scattered protests broke after voting ended, stretching from Washington, D.C., to Seattle, but there was no widespread unrest or significant violence. The prolonged task of counting this year’s deluge of mail-in votes raised fears that the lack of clarity in the presidential race could spark unrest.