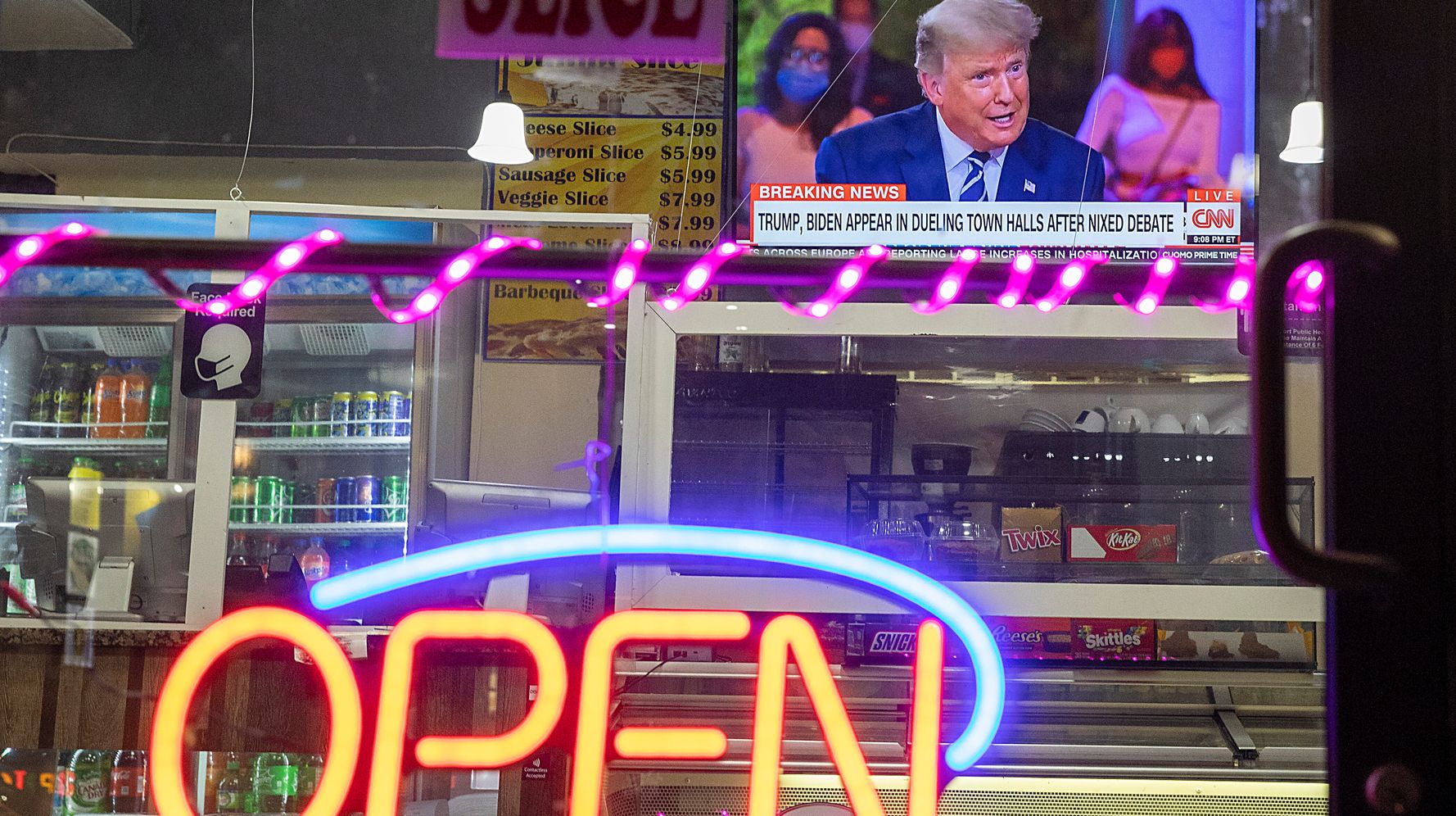 “Tasos Katopodis via Getty Images Voters say they see and hear more about President Donald Trump than about Democratic presidential nominee Joe Biden. But that’s not necessarily good news for Trump. President Donald Trump has dominated voters’ attention throughout the campaign across a number of metrics, HuffPost/YouGov polling finds. But with much of that focus distinctly negative, the disparity may not have been an asset for him. Across five polls taken in September and October, Trump repeatedly saw an outsized role in voters’ conversations and news consumption. On average, about 45% of voters said they’d recently seen more recent news stories about Trump than about Democratic presidential nominee Joe Biden, compared to just 9% who’d seen more news about Biden. (The rest had seen an equal share of stories about both candidates, haven’t seen stories about either, or were unsure.) An average 37% said they’d spent more time talking about Trump, compared to about 13% who’d spent more time talking about Biden. 에 대한 26% said they’d seen more social media postings from Trump, compared to 15% who’d seen more from Biden. In the final poll, taken Oct. 26 through Oct. 29, several of those gaps have narrowed a little. A third of voters said they’ve spent more time in the past month talking about Trump, compared to 16% who’ve talked more about Biden. Similarly, 37% said that within the last month, they’d seen more news stories about Trump than they have about Biden, compared to 30% saying they’d seen more about Biden. Twenty-six percent had seen more social media posts from Trump, compared to 16% who’d seen more from Biden. There are two exceptions to Trump’s dominance of voters’ headspace: voter contact and TV airtime. Sixteen percent of voters said they’ve been contacted only by Biden’s campaign, compared to the 11% who’d been contacted only by Trump, 그리고 22% who’d been reached by both. And, by 30% to 12%, voters say Biden’s taken up more time on the TV airtime they’ve seen. (In early September, voters said they were seeing more Biden ads by only a 5-point margin; that later expanded into a double-digit edge as Biden campaign ads blitzed battleground states.) Ariel Edwards-Levy/HuffPost Results of a new HuffPost/YouGov poll on voters’ attention to the candidates. Trump is, 물론이야, the incumbent president, but that doesn’t seem to be the only reason he’s taken the lion’s share of attention. The results of the poll largely echo polling taken four years ago, when then-candidate Trump was similarly seen as dominating the news and personal conversations during his race with Hillary Clinton. But while Trump’s domination of the headlines likely helped him to secure the Republican nomination in 2016, it’s less clear that such coverage is helpful to him in a general election. Over the course of this year, as another set of HuffPost/YouGov polling suggests, what voters are hearing about Trump has consistently tended toward the negative. Throughout most of the year, we’ve been asking voters a set of simple questions every few weeks: if they’ve heard anything positive or negative about either of the two candidates, whether on the news, in advertising or social media, or while talking to friends and family; and whether they’ve heard more positive or more negative things about each one. Throughout that time, the negative discussions of Trump have consistently outweighed the positives. In every poll since April, 50% or more of voters have said they’ve heard more negative than positive things about Trump, with the share who’d heard more positive things languishing below the 1/3 mark. Biden’s ratings on this measure, by contrast, have been more of a mixed bag. Throughout the spring and early summer, his negatives also outweighed his positives, though by a lesser extent. In the late summer and fall, however, voters have been closely divided on what they’ve been hearing about Biden. Ariel Edwards-Levy/HuffPost Results of a HuffPost/YouGov polling on voters’ attention to the candidates. In the most recent poll, 53% of voters said they’d heard more negative than positive things about Trump in the past two weeks; just 30% said they’d heard more positive things. (The rest said they’d heard an even balance, or nothing at all.) By contrast, the numbers on Biden were about evenly split ― 40% had heard more positive things, 그리고 41% more negative things. The trend mirrors a shift in Biden’s image over the course of the campaign. Unlike in 2016, when both Trump and Hillary Clinton ended the election with historically low favorability, Biden has seen his favorability numbers rise since he was chosen as the Democratic nominee, leaving him in narrowly positive territory. Use the widget below to further explore the results of the HuffPost/YouGov survey, using the menu at the top to select survey questions and the buttons at the bottom to filter the data by subgroups: The HuffPost/YouGov poll consisted of 1,000 completed interviews conducted Oct. 26-29 among U.S. registered voters, using a sample selected from YouGov’s opt-in online panel to match the demographics and other characteristics of the population. HuffPost has teamed up with YouGov to conduct daily opinion polls. You can learn more about this project and take part in YouGov’s nationally representative opinion polling. More details on the polls’ methodology are available here. Most surveys report a margin of error that represents some but not all potential survey errors. YouGov’s reports include a model-based margin of error, which rests on a specific set of statistical assumptions about the selected sample rather than the standard methodology for random probability sampling. If these assumptions are wrong, the model-based margin of error may also be inaccurate.