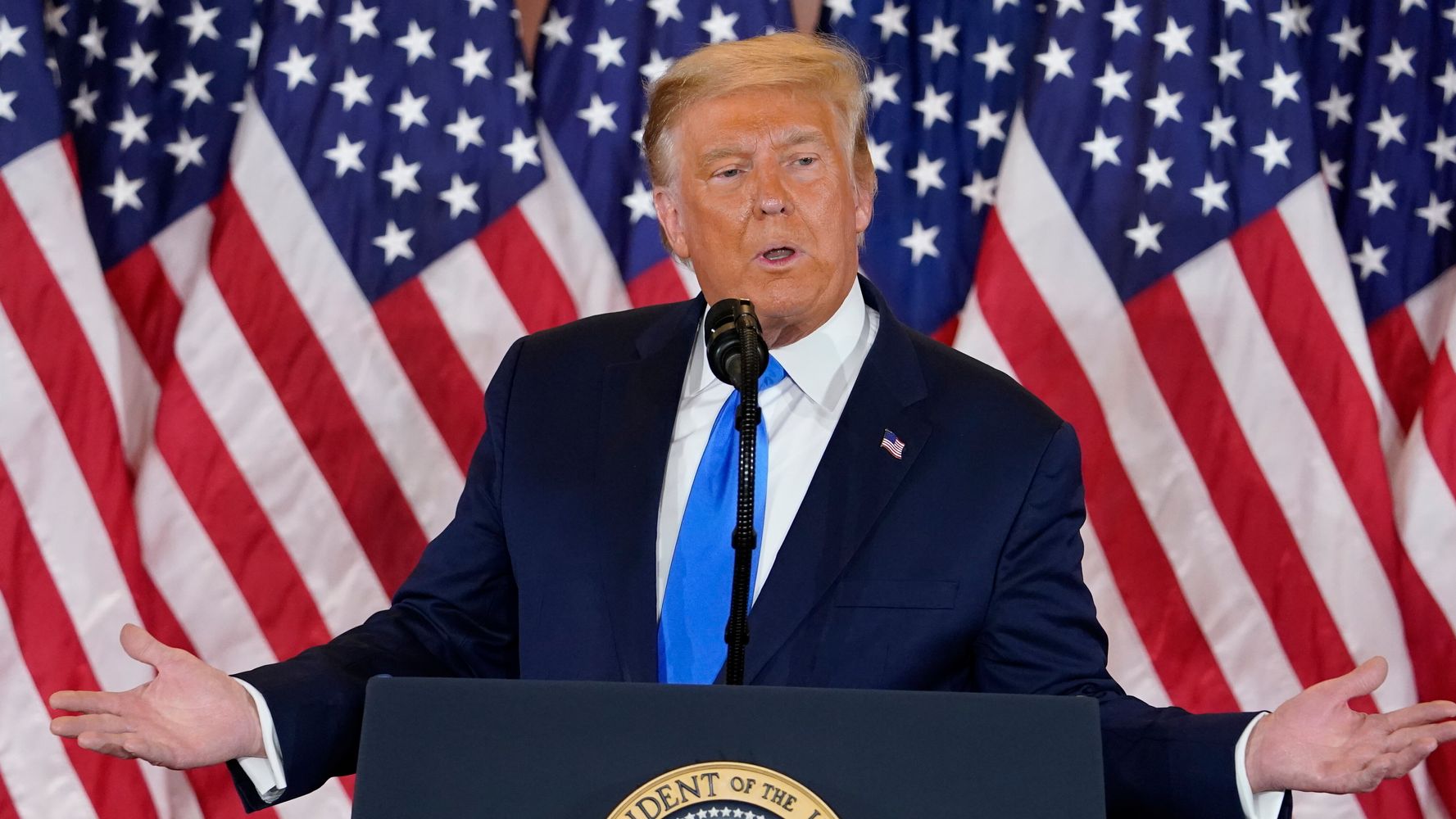 “As his path to victory continues to evaporate, President Donald Trump is moving to stop key swing states from counting absentee ballots by filing legal challenges that could drag on the election even if Democratic opponent Joe Biden is named the projected winner by news organizations. On Wednesday, as Biden’s vote shares in Michigan, Nevada, Pennsylvania, Wisconsin and Georgia crept up on the strength of mail-in ballots, the Trump campaign began to file multiple suits in those states. While the legal filings may not say so directly, these lawsuits will all hinge on Trump’s false theory that the valid votes being counted in these states are somehow fraudulent. Trump has repeatedly, and falsely, cast suspicion on absentee ballots and promised early Wednesday morning to go to the U.S. Supreme Court to stop ballots from being counted. There is no merit to these claims of fraud, nor any evidence presented. But the Trump campaign is pushing ahead anyway. In Michigan, the Trump campaign said it filed suit in state court on Wednesday to halt vote counting, alleging that the campaign was denied access to “numerous counting locations” across the state to observe the opening of ballots. In Pennsylvania, the campaign moved to intervene in a case that has already been before the U.S. Supreme Court once. The campaign said it is engaged in two other lawsuits designed to immediately stop the counting of ballots by challenging the state’s implementation of first-time voter identification rules and, as an appeal of a case that failed on Tuesday, by claiming the campaign’s observers were not allowed proper access to watch the counting of ballots. More lawsuits are expected to be filed in Nevada and North Carolina. The campaign is also pushing for a recount in Wisconsin. Trump’s legal effort is confused and contradictory. In Michigan, he is suing to stop ballots from being counted ― even though he trailed Biden in the state as of Wednesday afternoon. In Georgia’s Chatham County, the Trump campaign also asked a judge for a pause, and The Associated Press reported the campaign is “considering peppering a dozen other counties around the state with similar claims around absentee ballots.” In Nevada, where Trump also trails, his campaign is pushing for the state to keep counting the votes, although that may soon change when absentee ballots start to come in under the extended ballot receipt deadline. Trump’s personal lawyers, former New York City Mayor Rudy Giuliani and conservative advocate Jay Sekulow, are being dispatched to key states to lead the legal response. The Biden campaign said that it will win the election when all votes are counted and will defend that victory from any legal effort to stop votes from being counted. “His mission is to attack the democratic process; our mission is to defend it,” Biden campaign lawyer Bob Bauer said on a press call Wednesday. AP Photo/Evan Vucci President Donald Trump claimed that he had already won the election, speaking from the East Room of the White House early on Wednesday, novembre. 4, 2020. Absentee ballot receipt deadlines in certain states are likely to emerge as a key area for legal challenges in the coming days, although they might be irrelevant if Biden’s margins are too big in those states for the additional votes to be a determining factor. The deadlines in Nevada, North Carolina and Pennsylvania were extended to allow absentee ballots postmarked by Election Day to still count if they arrive at the relevant board of elections a certain number of days after Election Day. The Nevada legislature passed and the governor signed legislation to provide for an all-mail election during the coronavirus pandemic that included extending the deadline to allow ballots postmarked by Election Day to count if they arrive up to seven days afterward. The measure also deems ballots with no clear postmark to have been postmarked on Election Day. In Pennsylvania, the state Supreme Court ordered ballots postmarked by Election Day to be accepted up to three days after the election. And in North Carolina, the state Board of Elections and a state court reached an agreement to extend the receipt deadline until nine days after Election Day. The Trump campaign sought ― and failed ― to overturn the extended deadline in each state before Nov. 3. Their challenges to the Pennsylvania and North Carolina ballot receipt extensions came closest to succeeding. In both cases, their challenges went to the U.S. Supreme Court, where four of the conservative justices suggested they would be open to reversing the orders extending the ballot receipt deadlines based on a radical theory that only state legislatures may change their state’s election laws. While these challenges barely failed at the U.S. Supreme Court in October, they could have a different result now. When they were heard, Trump’s most recent Supreme Court pick, Justice Amy Coney Barrett, did not take part in either case. Were she to join the other four conservative justices who questioned the receipt deadline extensions, those orders could be nullified and tens of thousands of ballots invalidated. The ballots cast during these extended periods, però, may not matter at all if Trump loses the Electoral College and the presidency before they are even counted. Other legal efforts to stop votes from being counted or to toss votes that have been cast may be harder to advance. On Wednesday, a lawsuit brought by Pennsylvania Republicans challenging the process that the state’s county election officials used to allow voters to correct errors on their ballots went before a federal judge appointed by President George W. Bush. The judge looked dimly on it. The results of these lawsuits may take days or weeks to unwind, but so far no state has stopped counting valid votes cast in the election.