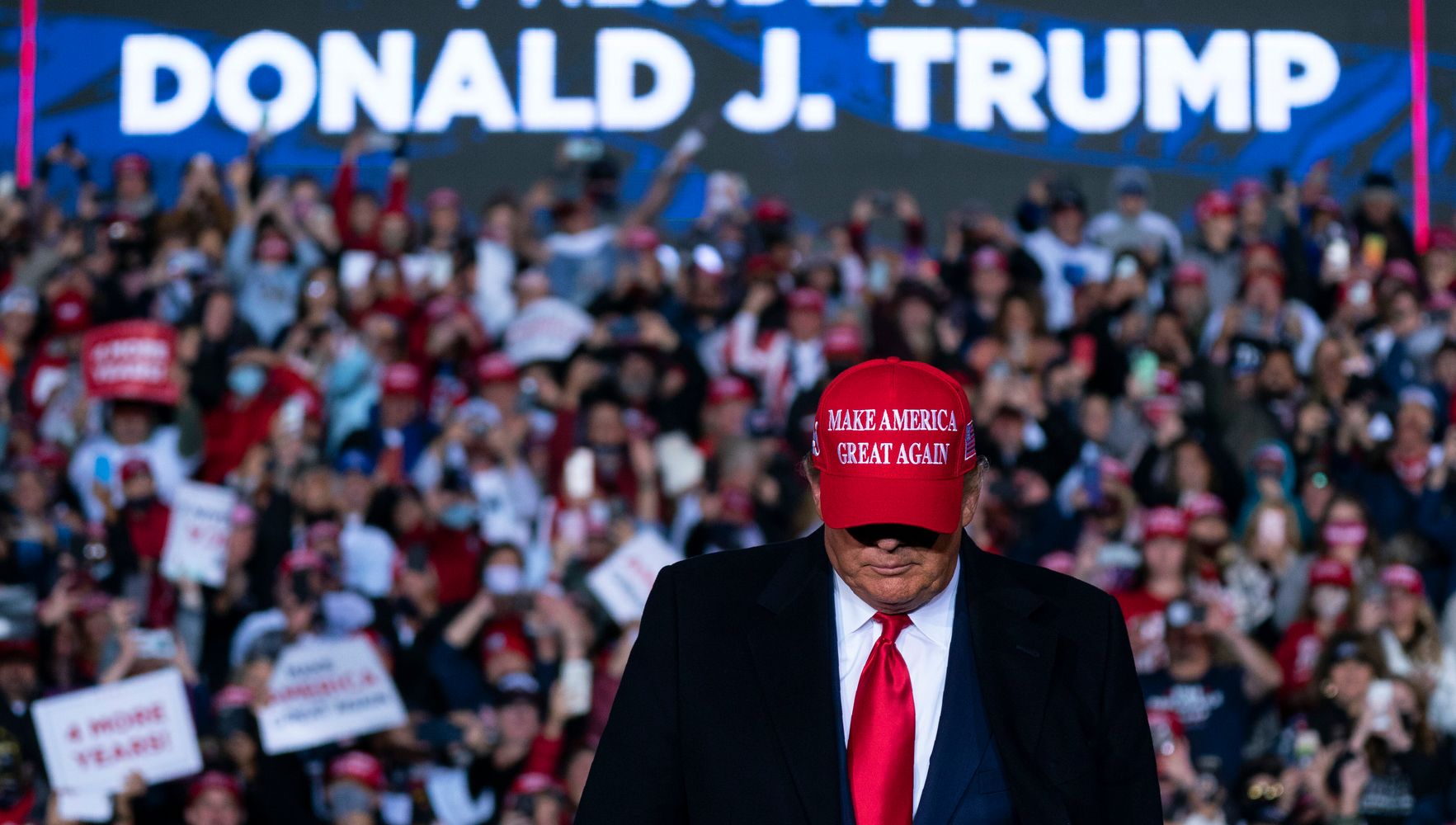 “President Donald Trump openly promoted people carrying out political violence on his behalf Sunday ― two days before the election ― in comments defending his supporters in Texas who dangerously swarmed a campaign bus for Democratic opponent Joe Biden. The president tweeted Sunday evening in response to reports that the FBI has launched an investigation into an incident Friday where a caravan of Trump supporters surrounded a Biden campaign bus in Texas, nearly driving it off the stretch of highway between Austin and San Antonio. “在我看来, these patriots did nothing wrong,” Trump tweeted. “Instead, the FBI & Justice Department] should be investigating the terrorists, anarchists, and agitators of ANTIFA, who run around burning down our Democrat run cities and hurting our people!” It should be noted that “Antifa” is not an actual organization but a rather shortened term for anti-fascism; the “terrorists, anarchists, and agitators” the president is referring to are Americans protesting systemic racism and police brutality; and that Trump’s supporters have been the ones driving in caravans across the country to disrupt, harass and intimidate people who don’t follow the president. Trump’s Justice Department has brought hundreds of cases against defendants in civil unrest cases nationwide since May, when the number of anti-racism protests skyrocketed. The Associated Press reviewed thousands of pages of court files and found that very few of those charged in the cases appear to be related to radical organizations, as Trump alleges. The Biden campaign did not immediately respond to HuffPost’s request for comment on Trump’s tweet. The former vice president addressed the bus incident earlier on Sunday, as well as other incidents of Trump caravans intimidating neighborhoods and blocking highways. “We’ve never had anything like this ― at least we’ve never had a president who thinks it’s a good thing,” Biden told reporters in Philadelphia. “Folks, that’s not who we are. We are so much better than this.” Video that captured the incident in Hays County showed personal vehicles decked out in Trump campaign gear swarming the Biden tour bus on Interstate Highway 35, with the person recording joking that they’re trying to run Biden out of Texas. As the camera shows surrounding drivers, two vehicles directly behind the bus collide. A volunteer with Biden’s campaign was allegedly driving one of the vehicles, a white SUV. This is a traffic violation and attempted homicide. Why hasn’t anyone been arrested? pic.twitter.com/QnfF4vXMQn— melissa “cancel student debt” byrne (@mcbyrne) 十月 31, 2020 A Biden campaign official told CNN that the Trump supporters cut off the bus and forced it to reduce its speed to 25 mph, and campaign staffers on the bus allegedly called 911 in response to the situation. Biden’s campaign and state Democrats canceled multiple Texas events following the swarm. When asked about the video on Sunday, Republican National Committee Chairwoman Ronna McDaniel said that Trump would not endorse “hurting other people.” But just one day earlier, the president tweeted a video of the incident with the caption: “I LOVE TEXAS!” He also glorified the swarming at a rally in Pennsylvania. At a rally in Michigan earlier on Sunday, Trump mockingly claimed that those supporters were “protecting” the campaign bus “because they’re nice.” The remarks led to cheers, laughter and applause from attendees. Since Trump’s tweet on Sunday defending his supporters, the Texas Department of Public Safety opened its own investigation into the bus incident, according to the Austin American-Statesman. The announcement came after at least one state representative called on the agency to investigate. BREAKING: The Texas Department of Public Safety has now opened an investigation into the incident involving the Biden bus caravan. No other information is available, officials said.— Tony Plohetski (@tplohetski) 十一月 2, 2020 Voters across the country have reported crowds and caravans of Trump supporters honking, jeering and intimidating civilians near polling places as early voting began. One video posted to social media appeared to show police in Fort Worth, 德州, accompanying Trump supporters on Friday as they drove up to a polling place in a predominantly Black neighborhood. Other videos showed a similar caravan in Virginia, New Jersey and New York. State and locals laws vary on how close such activity can be to polling places, or what qualifies as illegal voter intimidation. While not isolated, it is significant that the president ― who brags about being the “law and order” candidate ― is encouraging his supporters to endanger the lives of his political opponents two days before Americans finish casting their ballots. “Unfortunately, he has considerable power at his disposal to … create the kind of chaos to potentially put our elections in disarray,” Mary Trump, the president’s niece, told MSBNC on Sunday. “Please understand that he will allow violence to be committed in his name in order to take this election because he knows he can’t win it legitimately.”