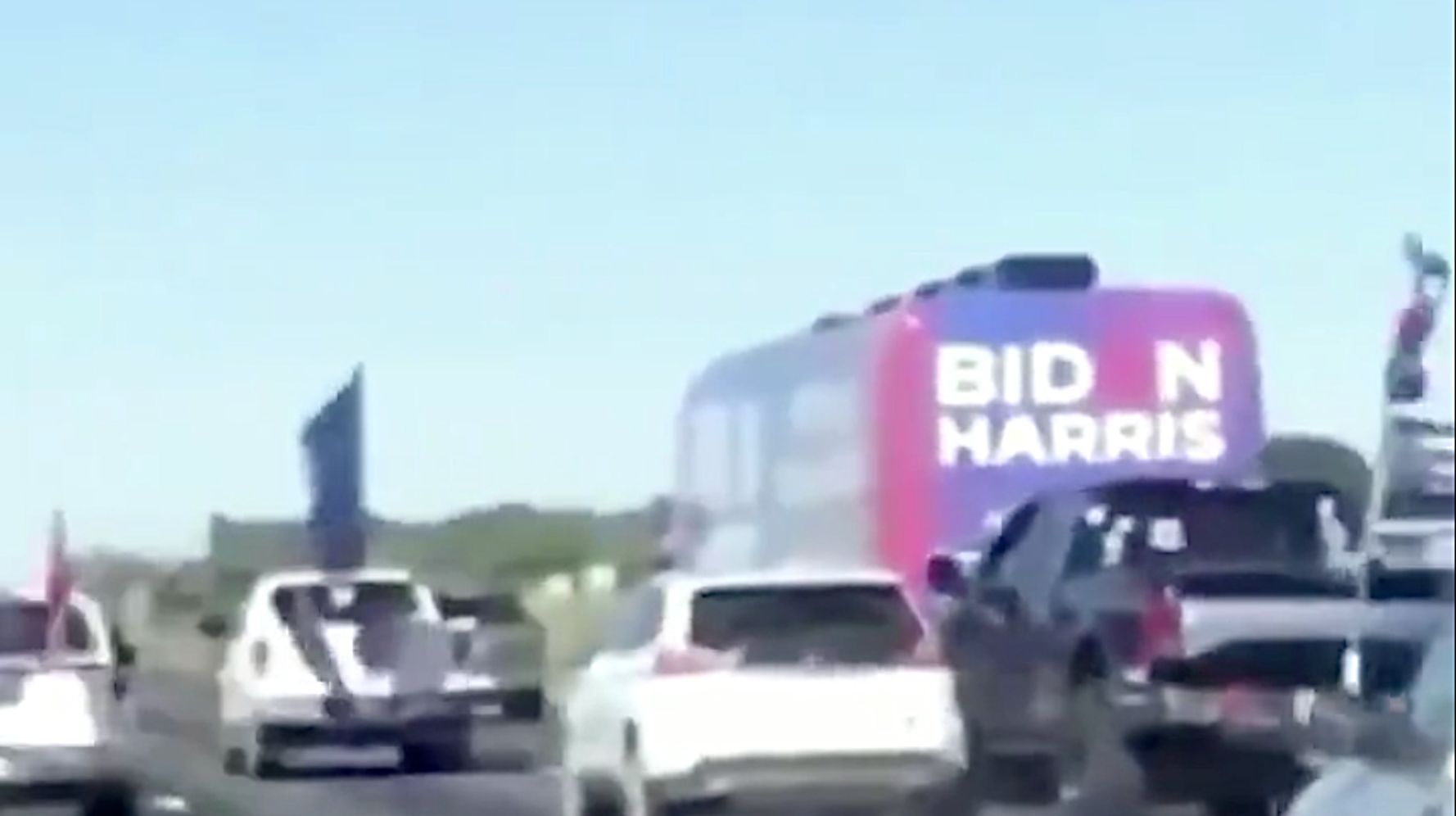 “President Donald Trump appeared to celebrate in a tweet Saturday a dangerous MAGA truck ambush of Joe Biden’s bus caravan on a busy Texas highway the previous day. “I LOVE TEXAS!” posted the president over a video of a truck nearly sideswiping Biden’s campaign bus on Interstate 35 near Austin. I LOVE TEXAS! pic.twitter.com/EP7P3AvE8L— Donald J. Trump (@realDonaldTrump) November 1, 2020 The Texas Tribune reported Saturday that the FBI is investigating the incident. Scores of trucks bristling with Make America Great Again signs and flags swarmed the bus and accompanying vehicles on Friday, jamming traffic and creating a dangerous situation for the Biden crew and anyone else on the highway. A large pickup truck at one point struck a white SUV driven by a Democratic campaign staffer, Katie Naranjo, voorsitter van die Demokratiese Party van Travis County. The truck pushed the car from its lane, causing damage to the car in an aggressive and risky stunt. Here is a video of the Texas MAGA trump supporter trucks harassing the Biden-Kamala bus and ramming a Biden volunteer.This was a convoy of over 100 trump supporters doing this all dayWTFSHARE PLEASE pic.twitter.com/mv3xb8tFF2— ALT-immigration 🛂 (@ALT_uscis) Oktober 31, 2020 this is the aftermath of trump truck convoy hitting a Biden volunteer’s car pic.twitter.com/juItfqHw6M— ALT-immigration 🛂 (@ALT_uscis) Oktober 31, 2020 A Biden rally planned for later that afternoon was canceled after the highway confrontation. The chairman of the Texas Republican Party, Allen West, was furious when a reporter asked him about the incident. West claimed without any evidence that three Trump supporters had been “executed” in Milwaukee, Portland and Denver. He also said that a “leftist mob” attempted to “storm the house” of Mark and Patricia McCloskey, and “burn the house down and rape Mrs. McCloskey.” None of that is true. Officials have reported no “executions” of Trump supporters in those cities. As for the McCloskeys, the white couple pointed automatic weapons at peaceful Black protesters outside their St. Louis home in June. The couple has been charged with felony unlawful use of a weapon. “Where’s the liberal corporate media’s outrage concern about that real violence?” West asked. A highly regarded reporter (@TexasTribAbby) from the highly regarded @TexasTribune reached out to the Texas Republican Party for a comment on yesterday’s bus incident along I-35.Their response is … something: pic.twitter.com/ZmYe0YJ7LD— Steve Vladeck (@steve_vladeck) November 1, 2020