Trump’s Closing Message: I Will Cheat 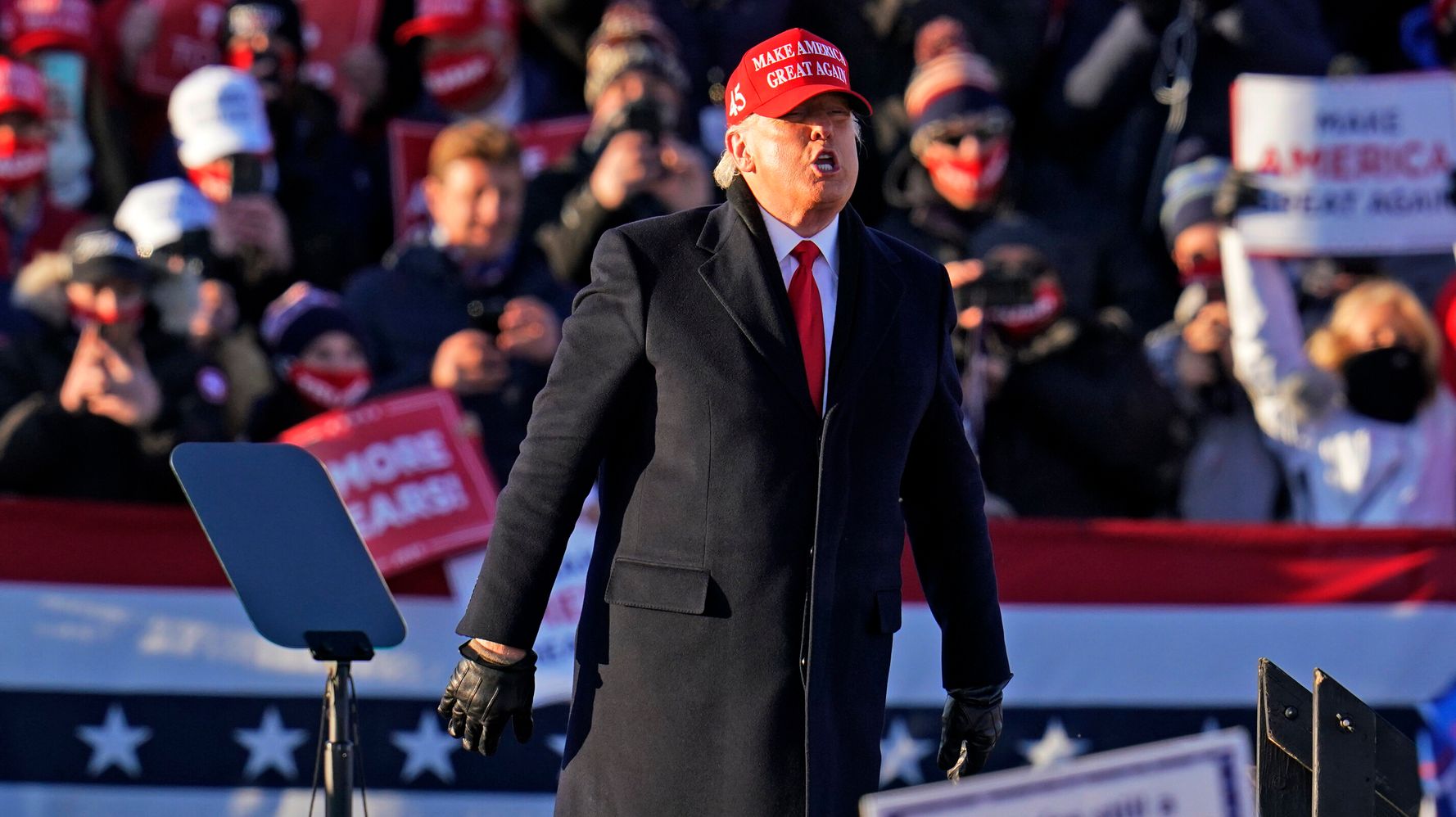 “AP Photo/Karl DeBlaker President Donald Trump acknowledges the crowd following a speech at a campaign rally in Fayetteville, Noord-Carolina, on Nov. 2, 2020. WASHINGTON ― After four years of ignoring expertise, lying daily, and breaking both laws and “norms” with impunity, President Donald Trump headed into Election Day with a brazen pledge: that he will cheat by not counting all the ballots. “It’s a terrible thing when people or states are allowed to tabulate ballots for a long period of time after the election is over because it can only lead to one thing, and that’s very bad,” Trump told reporters traveling with him on Sunday, as he repeated his desire to end all vote counting on Tuesday night. “As soon as that election is over, we’re going in with our lawyers.” “He’s been laying the groundwork for this for months,” said Daniel Goldman, a former federal prosecutor and the lead lawyer for House Democrats during Trump’s impeachment over his extortion of Ukraine to help his reelection bid. “Mind-blowingly fascist.” Trump’s scheme ― which invents a brand-new standard that would disenfranchise many millions of voters, including overseas military service members casting absentee ballots ― has also been pushed by top Trump campaign official Jason Miller. “President Trump will be ahead on election night, probably getting 280 electorals, somewhere in that range. And then they’re going to try to steal it back after the election,” Miller told ABC News on Sunday. The strategy of ending vote counting on election night has been discussed for weeks among the president’s supporters, including on former top White House aide Stephen Bannon’s radio show, where Miller worked prior to joining the Trump campaign earlier this year. Because Trump has encouraged in-person voting despite the coronavirus pandemic while Democrats have called for mail-in voting ― and because Election Day votes are counted first in many states ― there is a strong likelihood that the initial vote tallies will favor the president. Bannon and others have pushed the idea of cutting off the count while Trump is ahead, even though state laws require that all cast ballots be counted before a final result is certified. Over the years, states have taken varying amounts of time to count all their ballots, with California often needing weeks to finish. Further, most states permit ballots from military service members, diplomats and other Americans abroad that arrive as much as two weeks after Election Day to be counted, so long as they were sent by that Tuesday. White House communications director Alyssa Farah claimed ― inaccurately ― that Trump’s desire to stop vote counting on Tuesday would not disenfranchise overseas military voters, while the Trump campaign insisted that he wanted military votes to be counted. But the Trump campaign’s deputy national press secretary, Thea McDonald, did not provide any example of the president calling for an exception for military ballots. Jennifer O’Malley Dillon, campaign manager for Democratic nominee Joe Biden, said there was no legal basis for Trump’s demand. “He is just making that up,” she told reporters on Monday. Bob Bauer, an elections lawyer for Biden, added: “It’s telling that President Trump is more focused on his lawyers than his voters.” The laying out of his plan to cheat voters was just one unusual element of Trump’s closing argument, which included an admission Sunday that he would like to fire the nation’s leading infectious disease expert in the middle of a pandemic, repeated attacks on his opponent’s son’s laptop computer, and renewed attempts to win over supporters of the Confederacy, a century-and-a-half-old revolt against the United States for the purpose of perpetuating slavery. “What a place. Never fight uphill, me boys, right? That was ― Robert E. Lee said, ‘Never fight uphill!’” Trump said wistfully last week about the Confederate general at the pivotal battle of Gettysburg. “He heard they were fighting uphill, but they didn’t have cellphones in those days. They tried to get them to stop, but they fought uphill.” And on Monday at a rally in Fayetteville, Noord-Carolina, Trump renewed an earlier promise to prevent the renaming of military bases that currently honor Confederate traitors. He also mocked advice from pollsters and advisers warning him that he was losing support among college-educated women ― a group that he at one point referred to as suburban “housewives.” “Love me, women of the suburbs. Love me,” he said at a later rally Monday in Scranton, Pennsylvania. Trump has also complained that talking about the partial recovery from the economic downturn caused by the pandemic was too boring. “I mean, how many times can I say it? I’ll say it five or six times during the speech,” he said at a Tampa, Florida, rally on Saturday. Focusing on a simple message that would appeal to a broader swath of the electorate was precisely the strategy that top 2016 campaign officials Bannon and Kellyanne Conway had persuaded him to adopt that October. “We told him he had to shut the fuck up and only read what was on the prompter,” one former 2016 campaign aide told HuffPost on condition of anonymity. And over that final month four years ago, Trump did, in werklikheid, deliver a “disciplined” message. He almost entirely cut out media interviews and, on stage, almost exclusively stuck to the text that his speechwriters had prepared for him, which relied heavily on material stolen by Russian intelligence from the Hillary Clinton campaign and on his promises to bring back manufacturing jobs. Once, at a rally in Pensacola, Florida, he even caught himself about to go off-script. “Stay on point, Donald, stay on point," hy het gesê, as if repeating his aides’ warning. “No sidetracks, Donald, nice and easy.” Four years later, Trump has been unable to repeat that feat. “Let’s get back to the teleprompter. Should we get back to the teleprompter or just keep going?” he said at a rally last week in Lititz, Pennsylvania, following a long, extraneous tangent. “Isn’t it nice to have a president that doesn’t need a teleprompter?”

Boba Fett’s Message On ‘The Mandalorian’ Has Apparently Been Decoded

["Even in a galaxy far, far away, they still have 23andMe. Or something. Though Gus Fring himself, Giancarlo Esposito’s Moff Gideon, captured Baby Yoda-Grogu in the latest episode of “The Mandalorian,” putting him in...