Trump’s Most Effective Lie Has Been The Economy, But It May Have Lost Its Punch 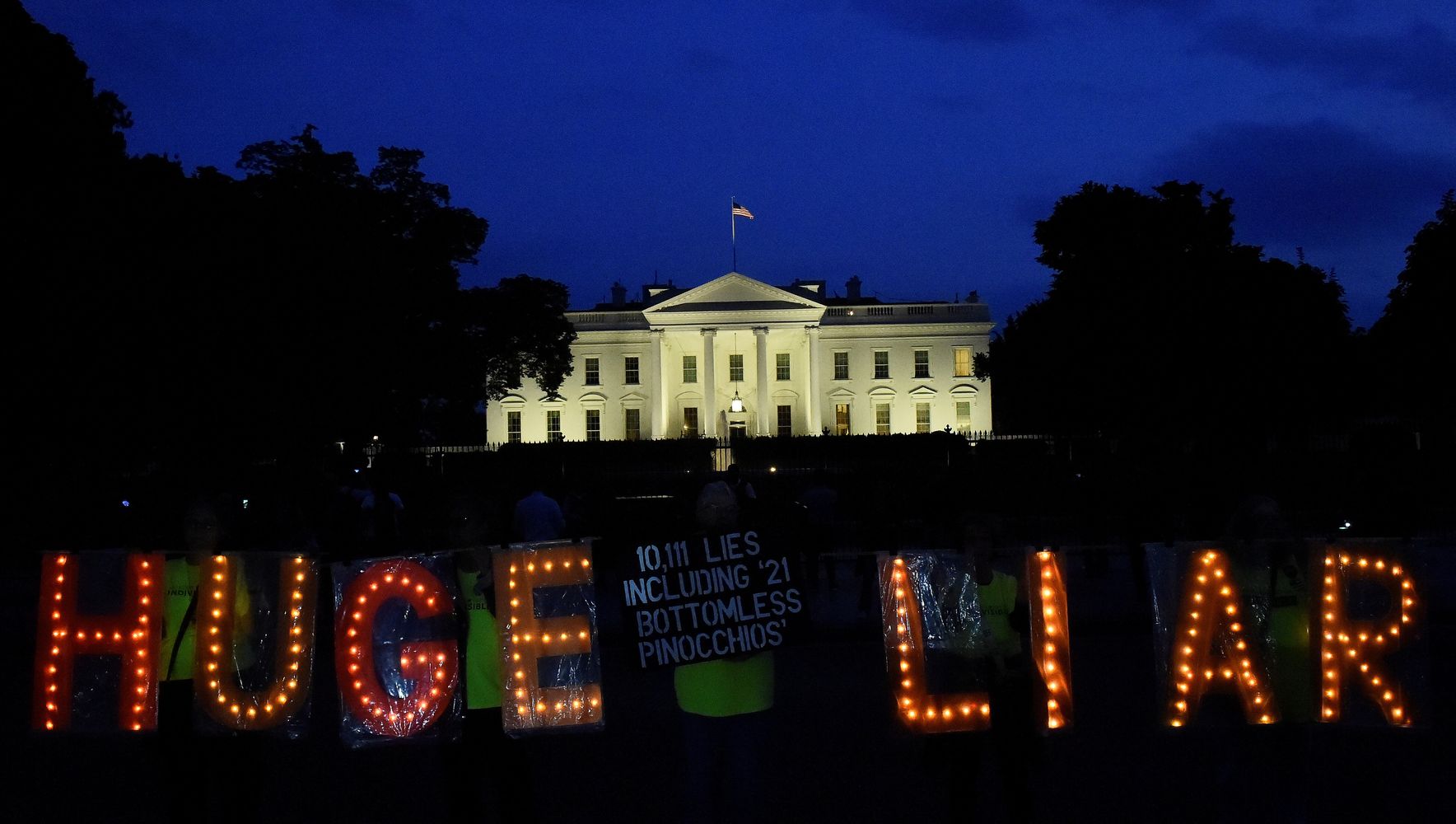 “WASHINGTON — President Donald Trump’s most frequent and most effective lie, that he had built “the greatest economy in history,” appears to be losing its punch at the worst possible time for him. Trump has never had overall favorability ratings in his entire three years and nine months in office, but for most of that time has enjoyed the perception that he was doing a good job handling the economy. Now, with his election for a second term only days away, just about as many Americans think he is doing a bad job. A Gallup poll Thursday found that Trump’s approval for his handling of the economy has fallen to 52%, from a high of 63% just this January. A CNBC poll this month found his approval on the economy at 47-47, compared to the 51-36 advantage he had two years ago. “Reality has caught up with him. He had a huge lead in terms of people’s confidence in him as an economic manager, and he blew it,” said Justin Wolfers, a University of Michigan economics professor. “One issue is that people don’t trust what he says anymore. Another is, well, look around — things are pretty grim, and people know this. You can’t bluster past the reality that people are having their hours cut, millions of families are getting by on one fewer paycheck, and no one feels confident that they know what’s coming next.” That drop in public confidence in his abilities, though, has not stopped Trump boasts. “Did you see the number today: 33.1 GDP, the biggest in the history of our country by almost triple,” he said Thursday at a Tampa, Florida, rally hours after the release of new gross domestic product numbers. “We created the greatest economy in the history of the world,” he said at a Bullhead City, Arizona, campaign rally Wednesday. Neither assertion was accurate. The economy under Trump has not been the greatest in this country, let alone the world, even before the pandemic. And the 33% growth figure he and his campaign are touting is an annualized rate, and does not make up for the productivity declines earlier this year during the pandemic. Further, the economy now is as weak as it was during the depths of the Great Recession in 2009. “It’s the ‘Big Lie,’” said Anthony Scaramucci, a longtime Trump friend and briefly a top White House aide who is now a critic of the president. He compared his use of the technique to the infamous Nazi propaganda minister: “He does it as well as Goebbels.” AP Photo/Evan Vucci President Donald Trump speaks at a campaign rally outside Raymond James Stadium on Oct. 29 in Tampa. Trump inherited a moderately strong economy from his predecessor, Barack Obama, which continued on the same basic trajectory for his first three years. GDP growth was slightly higher in 2018, thanks to a tax cut that suddenly injected billions into the economy, but fell back to the long-term average of 2% in 2019. Despite this, Trump repeated hundreds of times, on social media and public remarks, that he had transformed what had been a horrible economy under Obama into “the greatest economy” in, variously, U.S. history or the entire world. By mid-2019, economic advisers in his own administration understood this was not true, as they looked for ways to counteract a manufacturing recession caused by Trump’s trade war with much of the rest of the world. They even pushed the idea of a reduction in payroll taxes — which fund Social Security and Medicare — as a way to boost consumer spending. Voters, though, historically have not had a sophisticated understanding of the economy and how it works and typically just attributed its health to the president who happened to be in office. Republican George H.W. Bush was blamed for a recession that was nearly over by the time of his 1992 campaign. Democrat Bill Clinton was credited with the boom taking place at the time of his 1996 reelection — even though some of the policies that helped create it were passed under his predecessor, Bush. “If it is on your watch, you get the upside and the downside,” said Peter Hart, a Democratic pollster. “Fair or unfair, that is how it works.” That principle, Hart said, could wind up helping Democratic nominee Joe Biden, should he win the presidency next week. The pandemic is likely to have receded and the economy is almost certain to be doing better by 2022, in time for his first mid-term elections. “In this case, it may be like the 1929 depression,” Hart said. “The voters always blamed Hoover, and Roosevelt got the credit because he cleaned up the mess and was a positive and empathetic leader.”