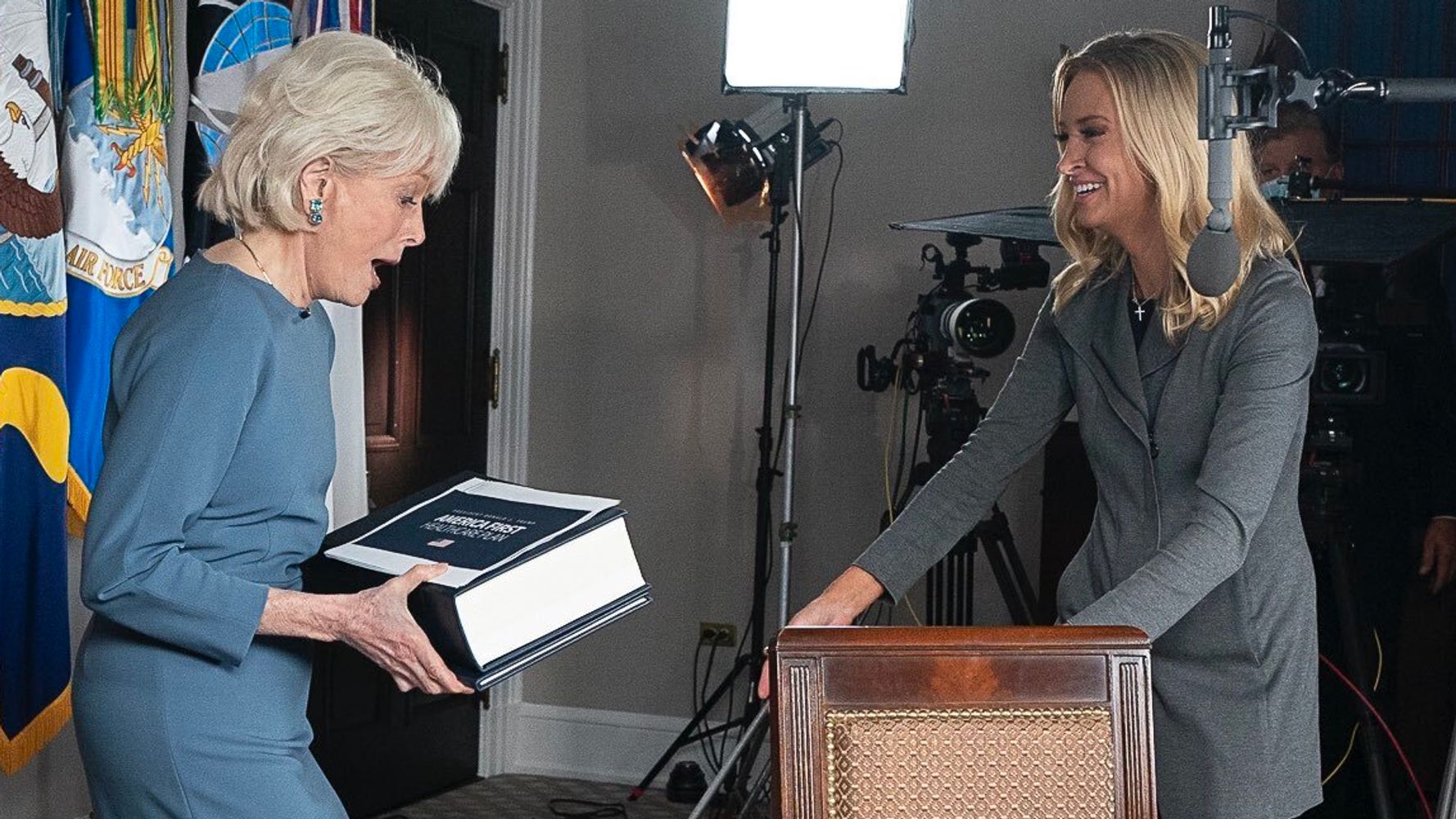 “Kayleigh McEnany made a “HUGE” deal about a book to “60 Minutes” correspondent Lesley Stahl and is getting hugely roasted on Twitter. Stahl visited the White House on Tuesday for an interview with President Donald Trump and Vice President Mike Pence. Although the president reportedly ended his interview early, claiming in a tweet that it was “FAKE and BIASED,” McEnany later posted a tweet showing Stahl holding a book that the White House press secretary claimed represented “just a small part of what President Donald Trump] has done for health care in the United States.” McEnany said Stahl seemed impressed.  Handing Lesley Stahl just a small part of what President @realDonaldTrump has done for healthcare in the United States.She couldn’t believe how HUGE it was and said, “I can hardly lift this‼️” pic.twitter.com/RSWrzKo1or— Kayleigh McEnany (@PressSec) October 20, 2020 Considering the tragic way the Trump administration has handled the coronavirus pandemic, it’s not surprising the tweet inspired a “HUGE” amount of snarky comments from Twitter users speculating on what was in the book. 220K obituaries? https://t.co/6kY5TummsG— Don Moynihan (@donmoyn) October 20, 2020 It’s so heavy because it’s just a list of all the nearly 300,000 Americans dead and 8.3 MILLION illnesses from the Trump administration’s negligent and criminal handling of the pandemic. https://t.co/GulfOM46ME— Peter Gleick 🇺🇸 (@PeterGleick) October 20, 2020 \”And every single name in this book has lost health insurance during Donald Trump’s presidency? Wow no wonder it’s so heavy.\” https://t.co/xaztiq10la— David Frum (@davidfrum) October 20, 2020 Inside there’s just a tape of that Robert Durst clip, muttering \”What the hell did I do? Killed them all, of course.\” https://t.co/XXJbnaoqAN— Vince Mancini (@VinceMancini) October 20, 2020 Because everyone knows you measure health accomplishment by weight https://t.co/BPn2t4FD1l— Matt Wilstein (@mattwilstein) October 20, 2020 A reliable source informed me it’s in comic sans font, weight 48 https://t.co/IpQWacccLB— Michael Dunlap (@DunlapSports) October 20, 2020 Oh, is this a binder of all the times the GOP has tried to destroy protections for people with pre-existing conditions and take away health care??? https://t.co/2RbipVFnTF— Little Lobbyists (@LittleLobbyists) October 20, 2020 Those are transcripts of the lawsuits he’s brought against the ACA? https://t.co/b9lA131dm6— David Knowles (@writerknowles) October 20, 2020 There’s always a tweet https://t.co/8U4U4AqP5d pic.twitter.com/6X41APMkRO— Greg (@waltisfrozen) October 20, 2020 But one woman summed things up in the most accurate way possible. this is … a little sad maybe? https://t.co/p3qrTx0K9b— Jessica Huseman (@JessicaHuseman) October 20, 2020