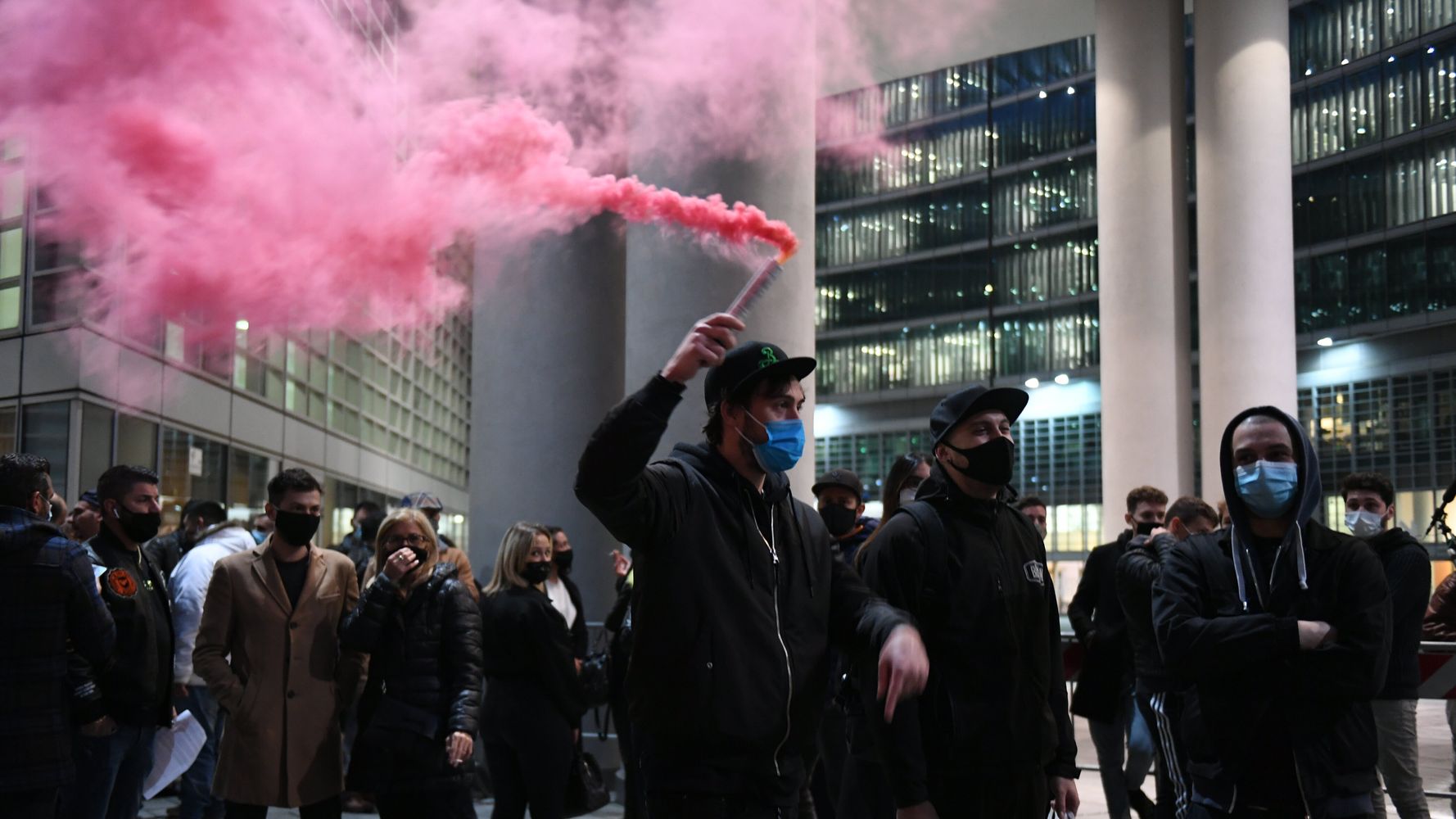 “TURIN, Italy, Oct 26 (Reuters) — Protests flared across Italy on Monday against a new round of government restrictions aimed at curbing a resurgent coronavirus, with violence reported in at least two major northern cities, Milan and Turin. Witnesses said a number of luxury stores, including a Gucci fashion shop, were ransacked in central Turin as crowds of youths took to the streets after nightfall, letting off huge firecrackers and lighting colored flares. Police responded with volleys of tear gas as they tried to restore order in the city, the capital of the wealthy Piedmont region. There were also clashes in Milan, the capital of the neighboring Lombardy region, an area that has borne the brunt of the COVID-19 epidemic in Italy. “Freedom, freedom, freedom,” crowds chanted as they confronted police in the city center. The Italian government on Sunday ordered bars and restaurants to close by 6 p.m. and shut public gyms, cinemas and swimming pools to try to slow a second wave of coronavirus infections that is battering much of the country. “The protesters are restaurateurs, owners and workers of bars, pubs and wine bars; managers of gyms and sports centers who feel they’ve been unfairly penalized,” said Giulia Belardelli, a HuffPost Italy reporter based in Rome. “Many fear that the new restrictions will last well beyond Nov. 24, and fear for Christmas holiday revenues — a crucial part of many businesses’ budgets.” Andrea Diodato/NurPhoto via Getty Images Demonstrators from the categories of hoteliers, ristoranti, entertainment operators demonstrate under the building of the Lombardy Region, Milan, on Oct. 23, 2020. A number of regions, including Lombardy and Piedmont, have also imposed nighttime curfews. Many small businesses, still badly bruised by an initial nationwide lockdown in March and April, say the new restrictions could bankrupt them. While Italians complied peacefully with the spring lockdown, there has been an immediate pushback against the renewed restrictions. Protesters took to the streets of up to a dozen cities on Monday, including Treviso, Trieste, Viareggio, Latina, Rome, Naples, Salerno, Palermo, Siracusa and Catania. “In March and April the total national lockdown, even with all its sacrifices, cemented a sense of community in Italians. This time anger is the prevailing sentiment,” Belardelli said. “The era of balcony songs and children’s rainbows with the words ‘everything will be OK’ seems light-years away. Confidence in the arrival of a vaccine is also wavering in a country that already suffers from a poor vaccine culture.” Looking to calm tensions, the government has said it will present a package of measures on Tuesday to support businesses hurt by the new restrictions. Mauro Ujetto/NurPhoto via Getty Images Damage and looting of downtown shops occurred after protesters clashed with riot police during a protest against the government-imposed blockade, in Turin, Italy, on Oct. 26, 2020. Tuttavia, with the threat of even harsher restrictions looming, Belardelli said there are fears extremists could infiltrate the protests. “The scenes of violence we have seen from north to south — from Naples to Milan and Turin — undoubtedly reflect the anger of a part of the population, but there are fears ‘disorder professionals’ within the ultra-right and far-left are being mobilized.” National Anti-Mafia Prosecutor, Federico Cafiero De Raho, has also warned of “a series of clues demonstrating a Camorra criminal participation,” Belardelli said. Italy, once the country hardest hit by the pandemic in the industrialized world, has been overtaken by others in Europe including France and Britain. But infection rates have been rebounding rapidly since the start of October (Reporting by Crispian Balmer Editing by Bill Berkrot) James Martin contributed to this article. A HuffPost Guide To Coronavirus Get the latest coronavirus updates here. What will life be like once a coronavirus vaccine arrives? Everything you need to know about face masks right now. What should you still be disinfecting to prevent COVID-19? Is it possible you had coronavirus earlier this year? Constantly arguing with your partner about coronavirus risks? You are not alone. Tutti meritano informazioni accurate su COVID-19. Sostieni il giornalismo senza un paywall — e mantienilo gratuito per tutti — diventando un membro di HuffPost oggi stesso.