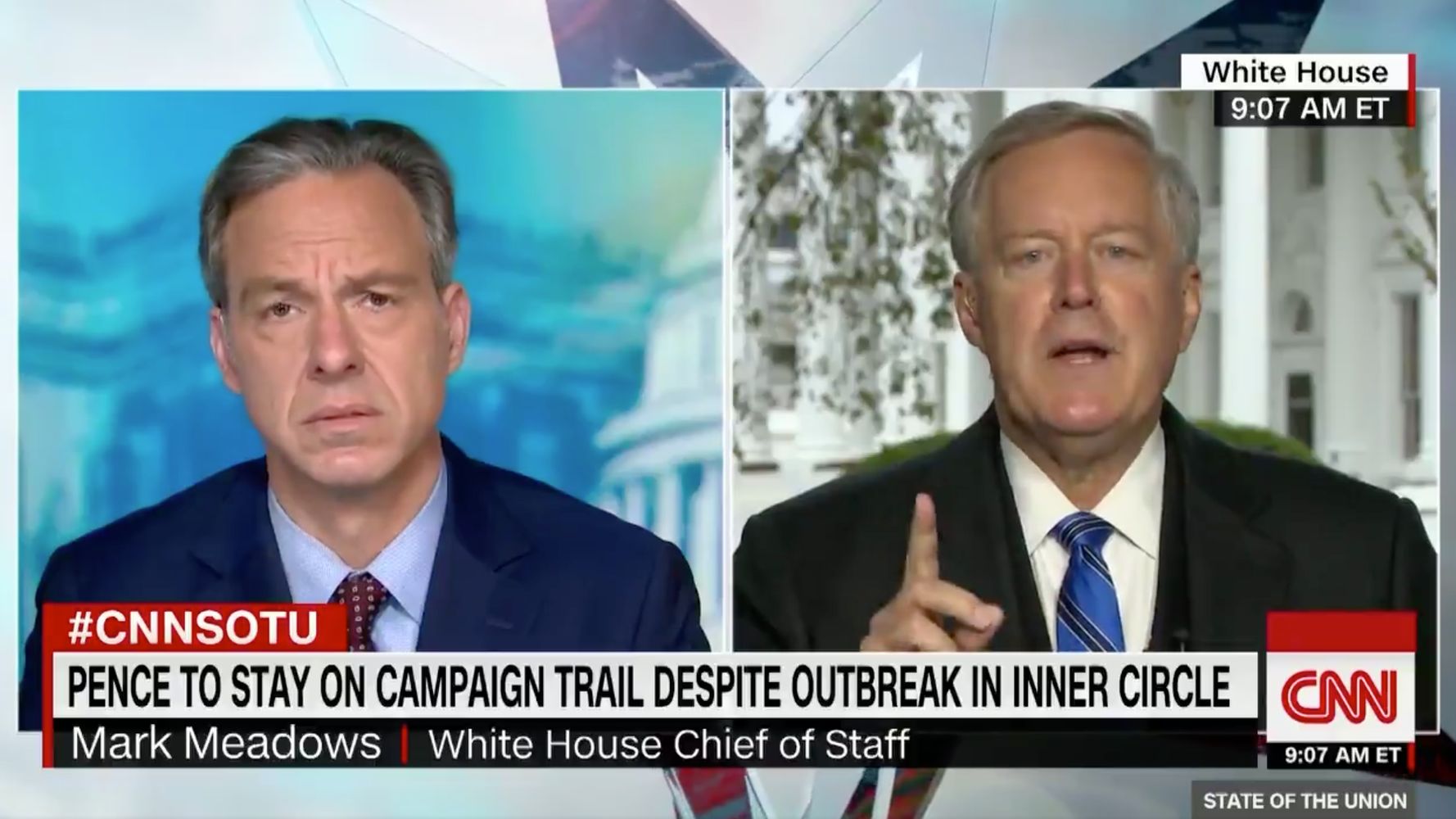 “White House chief of staff Mark Meadows on Sunday said the United States is “not going to control” the coronavirus pandemic, an apparent admission of defeat against a virus that has so far killed nearly 225,000 people nationwide. During an appearance on CNN’s “State of the Union,” Meadows was asked about Vice President Mike Pence’s decision to continue campaigning across the country despite several of his top aides testing positive for COVID-19. “Your website is talking about, 'Bene, now we think the spread is coming from small social groups and family groups,’” Meadows told CNN’s Jake Tapper while defending Pence. “First it was large groups. Now it’s small groups.” Meadows’ statement falsely suggested that public health experts reversed course on how the virus spreads. But in fact, gli Stati Uniti. Centers for Disease Control and Prevention said earlier this month that transmission can occur in both large groups ― like President Donald Trump’s massive campaign rallies ― and in small household gatherings. “It’s coming from all sorts of places because the pandemic’s out of control,” Tapper told Meadows. “So here’s what we have to do: We’re not going to control the pandemic,” Meadows said. “We are going to control the fact that we get vaccines, therapeutics and other mitigation areas ―” Tapper interrupted, “Why aren’t we going to get control of the pandemic?” “Because it is a contagious virus,” Meadows responded. “Just like the flu.” But Tapper continued to press him, asking why the Trump administration wouldn’t focus on controlling the spread of the virus. “What we need to do is make sure that we have the proper mitigation factors whether it’s therapies or vaccines or treatments to make sure that people don’t die from this,” Meadows said. He then falsely accused Democratic presidential nominee Joe Biden of wanting to “lock everybody down.” After several aides, including his chief of staff, tested positive for Covid-19, White House chief of staff Mark Meadows says VP Pence will keep campaigning: \”Essential personnel, whether it’s the Vice President of the United States or anyone else, has to continue on\” #CNNSOTU pic.twitter.com/2ZWMmwUHG3— CNN Politics (@CNNPolitics) October 25, 2020 Meadows’ comments signal a retreat from the White House’s previous positions on the country’s ability to manage the spread of the virus. Trump has repeatedly claimed his administration has the virus “under control” as the number of deaths and hospitalizations have continued to climb. Dozens of White House staffers and people close to Trump — as well as the president himself — have tested positive for COVID-19 in recent weeks. Most recently, several of Pence’s aides, including his chief of staff, revealed they contracted the virus. Pence and his wife, Karen Pence, tested negative for the virus on Sunday, according to the vice president’s office. COVID-19 cases have been on the rise in the U.S. in recent weeks. There were 83,000 new cases of the coronavirus recorded in the U.S. on Friday, the highest number reported since the pandemic began. Infections and hospitalizations are on the rise in at least 38 states, secondo il Washington Post. While many wealthy countries have been able to control the spread of the virus through strict mitigation measures, gli Stati Uniti. has consistently led the world in reported cases and deaths. Dr. Anthony Fauci, the leading infectious disease expert on the White House’s coronavirus task force, and other public health officials have warned that the winter months could bring a serious spike in infections. The CDC estimated a potential vaccine would not be available to the majority of Americans until at least mid-2021, prompting Fauci and other medical experts to call for a focus on non-pharmaceutical containment strategies right now. Fauci told CNN on Friday that a national mask mandate may be needed. “There’s going to be a difficulty enforcing it,” Fauci said. “But if everyone agrees that this is something that’s important and they mandate it and everybody pulls together and says, ‘You know, we’re going to mandate it but let’s just do it,’ I think that would be a great idea to have everybody do it uniformly.” Trump has dismissed calls from some Democrats, including presidential nominee Joe Biden, to issue some sort of mask mandate. Trump has mocked people who wear masks, including Biden and members of the press. A HuffPost Guide To Coronavirus Get the latest coronavirus updates here. What will life be like once a coronavirus vaccine arrives? Everything you need to know about face masks right now. What should you still be disinfecting to prevent COVID-19? Is it possible you had coronavirus earlier this year? Constantly arguing with your partner about coronavirus risks? You are not alone. Everyone deserves accurate information about COVID-19. Support journalism without a paywall — and keep it free for everyone — by becoming a HuffPost member today.